Snow Kiss Cookies To Die For by Wendy Kendall

Today's book is a thrilling mystery wrapped in a cozy romance.
Dez’s secret Santa project for her class turns terrifying when a secret admirer stalks her. There are a few suspects, including her new boyfriend. Wendy Kendall did a wonderful job keeping me guessing. Snow Kiss Cookies to Die For is an entertaining novella with a sweet (possibly deadly) romance, strong writing, and great characters. It's a great holiday story and a quick entertaining read. 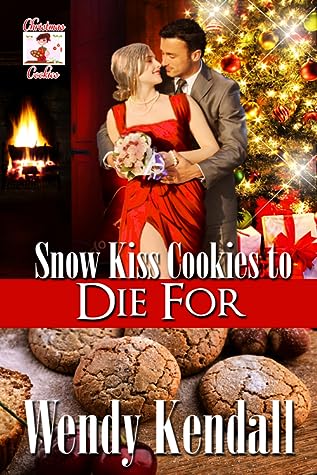 Blurb
First grade teacher Desiree Tucker is on the brink of winter holidays with her new, romantic boyfriend when danger encroaches on her joy. Ominous, untraceable texts buzz on her cell phone. Terrifying secret Santa gifts show up for her in the classroom. As the stalker moves closer to the prey, Desiree doesn’t know who she can trust. Her charming new man is a prime suspect. Is he a deadly stalker? If not him, who? What can she learn from the legend of the snow kiss cookie? Just when she’s starting to believe in magic again, she finds herself fighting for her life.
Read it today
Amazon  |  Barnes & Noble  |  Goodreads  |  Bookbub 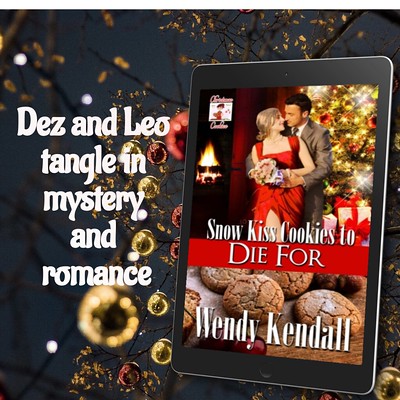 Peek between the pages
Dez made a beeline for her secret Santa stocking. Her excitement matched her students’ as she took down her stocking and reached inside. She pulled out the cardboard, and her heartbeat sped up. One look and her heartbeat pounded.

The card was a picture of Santa in his sleigh with reindeer. Her smile faded seeing a cut out photo of her face pasted on the drawn figure next to Santa. Where did that picture come from? The caption read: Secret Santa may sleigh you if you’re not a good girl

No signature. A secret and creepy Santa. Would Leo give her this? There was a bump in the toe of the stocking. She shook it upside down over the counter and a sprig of holly with berries fell out. From Saturday night’s heart wreath?

Dez looked around, including out the windows. Was anyone watching? The idea of someone putting up a stocking with her name was odd enough, but with this inside? Her phone vibrated. It was from the anonymous sender.

Her hand shook as she clicked on it and read, How did you like your card?
Browse my blog for more holiday romances in The Wild Rose Press Christmas Cookie series.
Posted by Cherie Colyer at 5:00 AM