Trick or Treat! ‘Tis the month to celebrate all things paranormal, supernatural, suspenseful, and mystical. If you’re like me, you’ll want to accept this very special invitation to join the festivities at N. N. Light’s Book Heaven’s 2nd annual Trick or Treat Book Bonanza. 46 authors share what they’d dress up as for Halloween as well as 53 books featured plus a chance to win one of five Amazon or Barnes and Noble gift cards..

Click here to discover new books, see what the authors would dress up as, and enter the giveaway.

There's still time to grab CHALLENGING DESTINY for .99 cents.
Get your copy today:
AMAZON       BARNES & NOBLE
Posted by Cherie Colyer at 9:00 AM No comments: 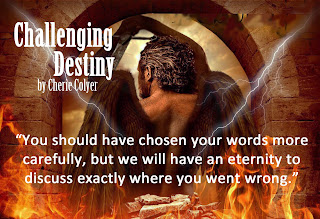 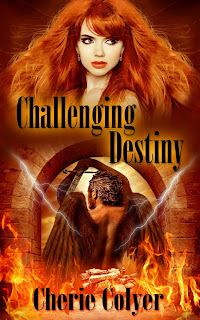 CHALLENGING DESTINY
Logan Ragsdale and his younger sister, Ariana, have been marked, chosen to be unwilling participants in a war between angels and demons.Logan can sense something’s not quite right. Like an unexpected chill on a summer’s day, he can feel the unseen closing in. He’s had these feelings before and, each time, someone close to him died. He’s afraid this time it might just be Ariana.Logan’s fears are soon confirmed when he discovers their new friends aren’t human, but rather representatives from Heaven and Hell sent to Earth to ensure he and Ariana accept their roles in an ancient prophecy. Demons want Logan to open the gates of Hell. Ariana has the power to stop them, but if she chooses to side with Heaven to spare the lives of thousands of innocent people, she’ll damn her brother for eternity.Together, they must derail the biblical event if they hope to save themselves and the future of mankind…but what price are they willing to pay to keep the other safe?
BUY LINKS
AMAZON       BARNES & NOBLE
Add to Goodreads TBR
I'd love to hear from you. Tell me in the comments what you love about this time of year.
Thanks for stopping by! Stay safe!
Posted by Cherie Colyer at 8:00 AM No comments:

Cover Reveal: DAMNED WHEN I DIDN'T 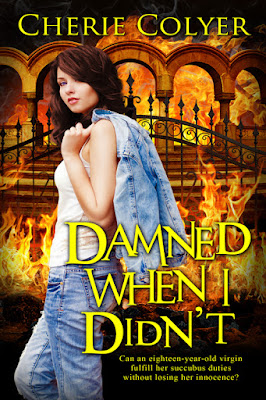 I'm thrilled to share the cover of my newest YA Paranormal Romance DAMNED WHEN I DIDN'T. What do you think?

A huge thanks to the cover artist, Diana Carlile, to my amazing publisher, The Wild Rose Press, to Xpresso Tours for organizing the cover reveal, and to all the amazing bloggers who are participating in the event. I couldn't have gotten here without them!

DAMNED WHEN I DIDN’T

Can an eighteen-year-old virgin fulfill her succubus duties without losing her innocence?
Death isn’t the end for eighteen-year-old Avery Williams, and her final resting place isn’t beyond the Golden Gates. No, the Queen of the Damned has plans for her and, unbeknownst to Avery, fought hard to gain possession of her soul. As Hell’s newest succubus, Avery is expected to siphon life from the living. It only takes a long, meaningful kiss, but for a virgin like Avery, kissing guys she barely knows isn’t something she’s comfortable doing. Avery focuses on the upside of her fate—she’ll be returning home, or so she thinks. When the Queen of the Damned cuts her off from her old life, Avery is determined to find a way back to her family and friends, even if it means facing Hell’s fury if she’s caught.

Add to your Goodreads

Visit my website to sign up and become one of my Book Insiders.
You'll get the latest updates about this title and more, plus a short freebie featuring Madison and Isaac from Embrace.

Posted by Cherie Colyer at 10:00 AM No comments:

I've been hiding in my writing cave, working on something new, polishing something old, and crafting stories for a special project. But you can always find me on Facebook or Twitter. Please, shoot me a message to say hi. I'd love to hear from you.

Looking for information on my published works? Hop over to my website or follow the links on the sidebar of this blog.

While you're here, feel free to peruse old posts. If you're a fellow writer, be sure the check out the useful tips under the Resources tab.