Welcome to my stop in the TSUNAMI CRIMES blog tour.

Chrys Fey was kind enough to answer a question about her book and share a teaser with us. Be sure to check them out and enter the giveaway. 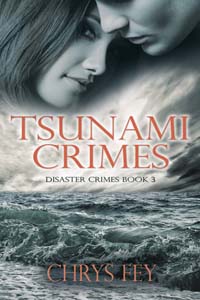 My question for Chrys: What was your favorite part to write in Tsunami Crimes?

Chrys's answer: While the tsunami and kidnapping scenes were the most exciting to write, and surprisingly the easiest, my favorite scene wasn’t even in the final draft of my book when I submitted it to my editor. Actually, I wrote it because my editor gave me the idea. At the end of a chapter, I had Donovan tell Beth they were going out for a romantic dinner in Hawaii. I skipped that scene, though, because I felt it wouldn’t add anything to the story. But my editor offered an idea: What about a luau?

The moment she said that, I hit myself in the head. Duh! Beth and Donovan are in Hawaii, and I hadn’t even considered sending them to a luau. I wrote the short, fun luau scene that leads to a romantic moment that’s quite sexy, which has to do with hula dancing. *wink*

Hula dancers in bright bikini tops took the stage next. Their grass skirts were low on their hips. Leaves adorned their ankles and wrists. Beth turned and covered Donovan’s eyes. He chuckled, and she laughed along with him. He put his arms around her, and they watched the dancers perform with Uli’Uli rattles made of gourds and red and yellow feathers. The sound of the seeds shaking inside them and the movement of the dancers’ hips was hypnotizing. Donovan couldn’t deny it. After their dance concluded, they invited audience members to join them on the stage. Donovan brought his mouth to Beth’s ear. “You should go up there.”

She rotated around. Firelight reflected in her wide eyes. “Are you crazy?”

“No. I’ve seen you move your hips before.” He winked at her.

She fought not to smile as she twisted her lips to the side. “Fine, but you better record it on your phone, because I won’t do it again.”

Beth and Donovan have come a long way from Hurricane Sabrina and the San Francisco earthquake. Now they are approaching their wedding day and anxiously waiting to promise each other a lifetime of love. The journey down the aisle isn’t smooth, though, as they receive threats from the followers of the notorious criminal, Jackson Storm. They think they’ll be safe in Hawaii, but distance can’t stop these killers. Not even a tsunami can.

This monstrous wave is the most devastating disaster Beth has ever faced. It leaves her beaten, frightened. Is she a widow on her honeymoon? As she struggles to hold herself together and find Donovan, she’s kidnapped by Jackson's men.

Fearing her dead, Donovan searches the rubble and shelters with no luck. The thought of her being swept out to sea is almost too much for him to bear, but the reality is much worse. She’s being used as bait to get him to fall into a deadly trap. If they live through this disaster, they may never be the same again.

P.S. Hurricane Crimes and Seismic Crimes are on sale for 99 Cents!

Email ThisBlogThis!Share to TwitterShare to FacebookShare to Pinterest
Labels: adult

Do you break the rules? #IWSG #amwriting

Happy New Year!
Here's wishing us all a wonderful 2017.


The past couple of years have been trying, so my hope for 2017 is that it's a happy year for us all. My goal this year is to get out more. To explore, to hike, to bike ride, and of course to keep writing and to find a home for my finished novels. I have a couple that I'm extremely excited about and that I'd like to share with readers everywhere.

This month's question: What writing rule do you wish you'd never heard?

This is a hard one for me. When I started writing, I hadn't known the "rules". Then I joined a writing group and found out I broke several rules. I revised and tweaked to conform. Then learned that it's okay to break the rules if it's important to the story. So there isn't one rule that I wish I had never heard. I'm just glad I became comfortable enough in my writing abilities to break the ones that aren't working for a particular story.

How about you? Is there a rule you wish you never heard? Any goals for 2017?

This has been an Insecure Writer's Support Group post. It's where writers share their thoughts, insecurities, and encouraging words. Thanks to Alex Cavanaugh and our co-hosts for keeping IWSG going. If you would like to know more about the group, just follow the link above.
Posted by Cherie Colyer at 4:00 AM 32 comments: