Summertime is here! That means beaches, free time, traveling
...what is awesome to have with you for all three??

Ready to win some free reading topped off
with two awesome gift cards?

Cover Reveal: Children of the Gods Series by Jessica Therrien

REDEMPTION (Children of the Gods #3) is ready and waiting! Along with it, Jessica Therrien will be re-releasing the first two books in her series. All of them have wonderful new covers designed by Carrie Butler, and OPPRESSION will even include a bonus chapter. Here is what you need to know:

There are others like her. Many of them. And they have been waiting for her for a long time.

Elyse knows what it means to keep a secret. She's been keeping secrets her whole life. Two, actually. First, that she ages five times slower than average people, so that while she looks eighteen years old, she's well over eighty. Second, that her blood has a mysterious power to heal.

For Elyse, these things don't make her special. They make life dangerous. After the death of her parents, she's been careful to keep her secret as closely guarded as possible. Now, only one other person in the world knows about her age and ability.

Or so she thinks.

Elyse is not the only one keeping secrets. There are others like her all over the world, descendants of the very people the Greeks considered gods. She is one of them, and they have been waiting for her for a long time. Some are waiting for her to put an end to centuries of traditions that have oppressed their people under the guise of safeguarding them. Others are determined to keep her from doing just that. But for Elyse, the game is just beginning-and she's not entirely willing to play by their rules.

The Descendants have waited long enough for freedom.

Elyse has done everything she can to protect her friends from The Council's reach. As long as they believe she's dead, she has time to rest and train for war. And war is inevitable.
When Kara arrives with the news that Anna and Chloe have been captured, Elyse is faced with the realization that no one is safe until The Council is stopped and Christoph is destroyed. She doesn't need a prophecy to tell her to lead an army. Christoph has done the one thing that ensures she'll fight to the death. He's threatened the people she loves.
It will take more than the words of an oracle to help them fight against the most powerful Descendant alive. To break The Council's oppression and rise up against a plot so many years in the making, Elyse will need to get dangerously close to her enemy. So close, in fact, she may not survive.

Nobody promised freedom would be peaceful.

Lead Council member, Christoph, is dead by Elyse’s hand, and Descendants have begun to emerge, exposing their secret to the world. Some see this as the prophecy come to fruition, but the prophecy caries a heavy consequence. It was never meant to be as peaceful as most had hoped.
Humans and Descendants struggle to live together in a world that isn’t ready for such a change. America is divided. Those who glorify the supernatural race believe Descendants truly are the gods they claim relation to. Others see them as a threat.
When Elyse gives birth to the next generation oracle, she sees one final vision—war. The destruction of the country’s major cities, and the end of America as we know it.
After her daughter is born, Elyse finds herself without the ability she needs to predict the future. Desperate to save the world from such conflict, she puts her faith in the hope that Descendants are the key to survival. After all, they have the power to supply a broken society with the means to survive.
Only from the ashes can a new world be born.

Ghosts, Shades and Specters: Have you met one?

The last supernatural beings in my real or fictional posts are ghosts, shades, and specters. What's the difference? I'm glad you asked!

Ghost: a visible disembodied soul
Shades: the shadows that gather in cemeteries
Spirits: the immaterial intelligent or sentient part of a person

Madison Riley has met her fair share of shades, ghosts and spirits in the Embrace Series. Of course, meeting other supernatural creatures is all part of possessing magical powers.

If you're a believer in these entities, then you probably know the temperature in a room tends to drop when one of these creatures are nearby. So the next time you walk through a sudden cold spot, say hello. Someone or something unseen might just answer you.

Ghost, shade or specter: what these entities have in common is they are souls of the deceased that can appear in visible manifestation. Mediums can sense ghosts, psychics can communicate with them, and humans have seen them. There are even television shows dedicated to finding ghosts.  Of the different supernatural beings, ghosts are the hardest to dispute.  Wouldn't you agree?


Still on the fence about these spectral beings?
Meet the ones Madison has and then decide.

~Click the cover to learn more about each book ~
Posted by Cherie Colyer at 7:00 AM 6 comments:

Book Blitz: Devil Made Me Do It by Shawna Romkey

Congrats to Shawna Romkey on the relaunch of her novel! 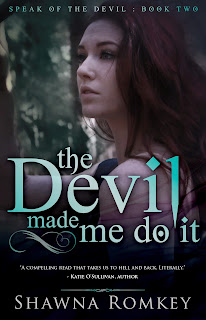 The demons strike back!

Lily is working with the angels to stifle the last of the demon outbreaks and to figure out how to stop the Silence of God, so life can get back to boring normality. But all hell breaks loose when she's stolen from school and brought face to face with the devil himself. Lily has to find her way back home to Luc, crack the prophecy that breaks the curse silencing God, and figure out how she and Luc can ever really be together; but Lucifer has other plans for her that don't include her ever getting out of Hell intact.


Read The Devil Made Me Do It today:

Shawna grew up around farms in the heart of Missouri but went to the University of Kansas, was raised in the US but now lives on the ocean in Nova Scotia with her husband, two sons, one rescue dog and one overgrown puppy from hell. She’s a non-conformist who follows her heart.
She’s taught English at the university and secondary levels for close to twenty years and can’t quite fathom how all of her students have grown up, yet she’s managed to stay the same.  She’s a huge geek and fan of Xena, Buffy and all kick ass women, and loves to write stories that have strong female characters.

I'm taking a break from the Real or Fictional posts I've been sharing for ISWG. I'll share the last post in that series next week. For now, kick up your feet and follow Insecure Writer's Support Group as we share our thoughts, insecurities, and encouraging words. Thanks to Alex and our co-hosts for keeping IWSG going. 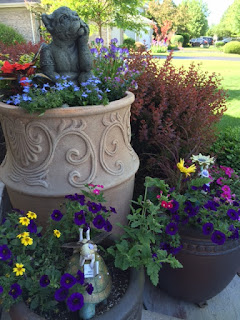 I think April showers have moved to May. At least in the northwest. But that's okay, because Mother Nature helped water my new planters and other plants. I actually look forward to this time of year, because I do some of my best plotting while doing yard work.

Okay, sharing pictures isn't part of IWSG, but since these planters helped me figure out which novel to work on next and they brighten up the post, I'm including them.


As far as insecurities, they are there. I have a newly released book to continue marketing, one my agent is subbing, one she's reading, my standalone novel that needs some love, the list goes on. But things outside of writing have kept me too busy (slightly stressed) to worry about those things. My agent did give me a heads up that she enjoyed my new novel, which has helped as well. I've said it before, but I'll say it again, keeping busy is one of the best way to keep you from dwelling on the things your insecure about. 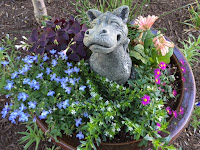 One more planter before I go. I named the dragon in this one Puff after one of my favorite dragons in a children's story. Anyone know which movie I'm talking about?

Did you get a ton of rain last month? Are you keeping busy? How's your writing coming? Any insecurities?
Posted by Cherie Colyer at 6:00 AM 30 comments: