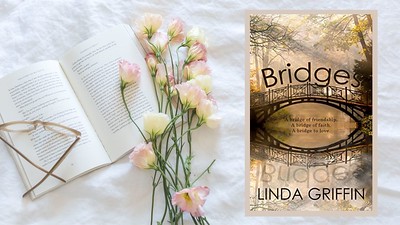 I'm delighted to welcome Linda Griffin to my blog. She's chatting about her new sweet romance BRIDGES. Without further adu...
What inspired you to write this book?

As often happens with me, it took the combination of two ideas to create the spark. I saw a French film about a chauffeur and noticed that his job involved a lot of waiting time, so I thought it would be a good fit for someone who loved to read. The character of Mary Claire came to me, through a process I can’t explain, pretty much the way she is in on the page, right down to her brothers’ names and fates. I brought the two characters together, and they took it from there. The tone, more old-fashioned and formal than my other novels, was largely due to my reading classic novels, including Barchester Towers by Anthony Trollope, before I began writing it.

A Stolen Life by Jaycee Dugard. I think it gave me PTSD the first time I read it. For a while afterward, I couldn’t seem to read or write anything except captivity stories. One of them, Rumpelstiltskin, was published in Eclectica and can be found here: https://www.eclectica.org/v22n2/griffin.html (Reader discretion advised!) I even wrote a science fiction story about traveling back in time to rescue Jaycee. I admire her so much for choosing to live a positive, purposeful life.

My very first Dick and Jane reader ignited my passion for the written word. I read it out loud to everyone in the house, including two captive kittens, one under each arm, and then I read it backwards. As soon as I figured out that somebody had to create the words I was reading I knew I wanted to be a “book maker” when I grew up. I wrote my first story, “Judy and the Fairies,” with a plot stolen from a Little Lulu comic book, at the age of six and never looked back.
About the Book 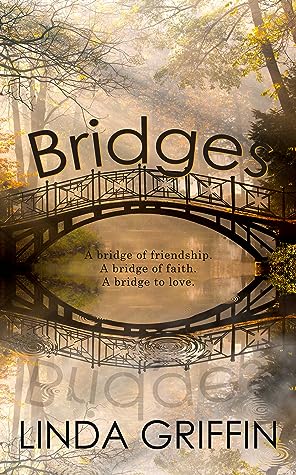 Bridges
Author: Linda Griffin
Genre: 20th Century Historical Romance
Heat level: Sweet
Blurb
In 1963, Neil Vincent, a middle-aged World War II veteran and “Christian atheist” is working as a chauffeur at Westfield Court. He spends most of his spare time reading. Mary Claire DeWinter is a young, blind, Catholic college student and reluctant heiress. To secure her inheritance, she has to marry within a year, and her aunt is pressuring her to marry a rich man who teased and bullied her when she was a child. Neil and Mary Claire shouldn’t even be friends, but the gulf between them is bridged by a shared love of books. Can they cross the bridge to more?
Grab your copy today
Amazon  |  Barnes & Noble  |  Apple

Peek between the pages
On the drive to Brierly Station, he didn’t speculate about who Miss DeWinter might be. It wasn’t his job to know who she was, only to meet her train and take her safely back to Westfield Court. She wouldn’t be the last of the friends and relatives who would gather as the old man’s life came to its long-awaited and peaceful end.

Brierly was bustling today, as restless as the St. James household. He was in plenty of time for the train and sat in the car reading. The car was a Bentley Mark VI, as well-maintained and highly polished as it was the day it was purchased. The book he was reading was Thomas Hardy’s The Return of the Native.

When the train rumbled in, he got out of the car. He stood patiently on the platform as the passengers disembarked, holding up a small slate on which he had chalked DEWINTER in large capitals. There weren’t many passengers, but they were briefly delayed while the conductor helped a blind woman navigate the steps. Neil’s gaze fell expectantly on a woman in her thirties, with an awful hat, but she was immediately met by a portly man and a teenage boy. No other likely prospects appeared, and he waited for someone to respond to the sign. No one did.

Finally, only two passengers were left on the platform—a small, homely man and the blind woman. Blind girl, really. She couldn’t be more than twenty. She had a jointed white cane, and her large sunglasses didn’t cover the edges of the scars on her face. She would not have been beautiful even without the scars—too thin, for starters, of average height but with small bones. On the other hand, her face might once have been pretty, and her hair was clean and shining, raven black, and well brushed. She was too pale, and the scars around her eyes were red and ugly. She looked a little lost.

Feeling foolish, he lowered the slate. “Miss DeWinter?” he asked as he approached her.

“Yes,” she said, turning toward his voice with a smile.

About the author:
Linda Griffin is a native of San Diego and has a BA in English from San Diego State University and an MLS from UCLA. She retired from a position as fiction librarian for the San Diego Public Library to spend more time on her writing. Her stories have been published in numerous journals, including Eclectica, Thema, The Binnacle, Orbis, and mostly recently The Adirondack Review. Bridgesis her fifth novel published by the Wild Rose Press, following Seventeen Days (2018), The Rebound Effect (2019, Guilty Knowledge(2020), and Love, Death, and the Art of Cooking (2021).

Email ThisBlogThis!Share to TwitterShare to FacebookShare to Pinterest
Labels: romance