I'm delighted to welcome Alex Cavanaugh to my blog. His newest book CassaDark is out and Alex shared a peek between the pages. But before we get to that, let's get to know Alex.
Speed round.
Favorite food? Thai food followed closely by Chinese.
eBook, paperback, or audiobook? eBooks. Cheaper and they take less space.
Favorite season? Winter! Yes, I like snow and cold.
Favorite holiday? Christmas! And the reason for the season.
Favorite movie? So many to choose from, but I’ll stick with Aliens.
Night on the town or cozy evening in? Cozy evening in every time – I’m such a homebody.
Favorite fictional world? Living in a Hobbit hole would be cool, but I’m going with Narnia.
Favorite TV show? Do I have to pick one? Firefly, Stargate SG1, and Stargate: Atlantis.
Beach or mountains? Mountains! Did I mention snow…? 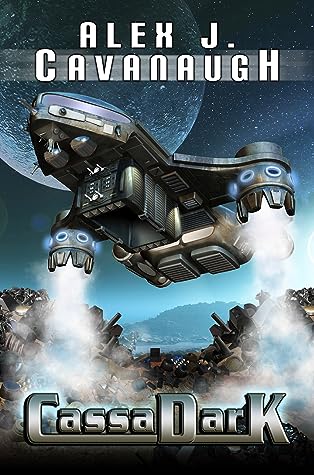 CassaDark
By Alex J. Cavanaugh
His world is unraveling…
Bassan’s father is stepping down from command. His best friend almost dies when Bassan freezes. Now, he’s being sent across the galaxy to speak at an important conference. Despite saving the eleven races years ago, he’s paralyzed by fear and doubt. Could things get any worse?
Once there, new acquaintance Zendar convinces Bassan to visit his planet for a humanitarian mission. Bassan’s special connection to ancient technology is the key to saving Zendar’s people. One problem though—it’s a prisoner planet.
On Ugar, he discovers things aren’t so straightforward. As each secret reveals itself, the situation grows more desperate. If he can’t find the right answers, he might die along with Zendar’s people. Can Bassan summon the courage to be a hero again?
Trade paperback, 226 pages, Dancing Lemur Press, LLC
Science fiction - Adventure (FIC028010) / Space Opera (FIC028030) / Space Exploration (FIC028130)
Print ISBN 9781939844842 $16.95 / eBook ISBN 9781939844859 $4.99
Grab your copy today
iTunes – Amazon – Barnes & Noble – Kobo – Scribed – Goodreads 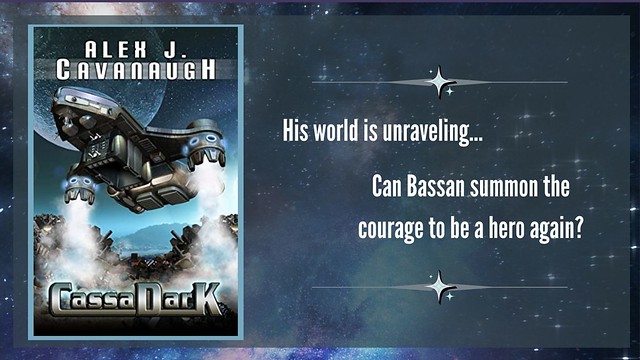 Peek between the pages of CassaDark
A moment later, Witz pointed. He began to move, and Bassan fell in behind the man. They crept to the end of the pallets. The three gathered and grasped the garbage cart. Zendar swung his pack atop the heap of tangled metal and wires.

Three attendants might seem odd, but with this cart loaded to overflowing, hopefully no one notices, Zendar thought. We’re going to have to hustle though. Those garbage rigs move fast. Get on board the ship and head for the entry door. Anyone stops us, show them your badge.

If it gets weird, I’m prepared to take action, Witz thought, patting his left hip.

Witz was carrying. Bassan dropped his gaze to the hangar floor.

Please don’t let it get weird…

The cart lurched forward, and Bassan stumbled to catch up. Witz and Zendar moved with a purpose across the hangar floor, aiming for the ramp. Bassan pumped his legs in earnest to keep pace. Every nerve tingled. He cast a sideways glance at the big rigs loading into the ship. The last one lurched toward the ramp, threatening to fill the width of it. If they didn’t reach it first…

They picked up the pace. His feet threatened to tangle from the sudden inertia. The cart hit the ramp and Bassan pushed with every ounce of strength in his body. Each step carried them closer to their ticket to Ugar. Bile rose in his throat. Their goal grew closer. And yet it spelled his doom.

What am I doing?

Bassan continued forward, clinging to the car. His chin dipped and he got a decent look at the rig rising up the ramp behind them. Rising fast. Much faster than their current speed.

We’re about to be crushed, he thought, ramming his chest into the cart’s handle.

Bassan pumped his legs harder, spurred by mortal fear. The rumble of the rig behind them grew closer. The grinding of its gears filled the air. The sight of Drent’s bike tumbling toward the cliff’s edge filled Bassan’s mind. He couldn’t stop it. Nor could he stop the garbage rig from overtaking them.

The cart’s front wheels went airborne. Momentum took them forward before the cart slammed against the floor. The very flat floor. They’d reached the interior of the ship. 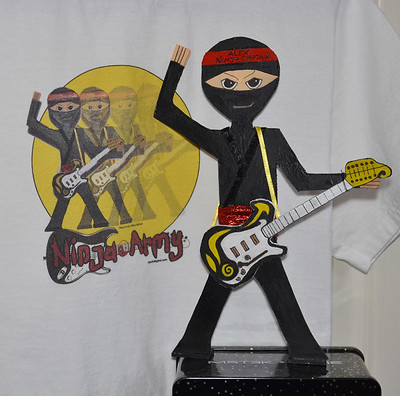 About the author:
Alex J. Cavanaugh works in web design and graphics, and he plays guitar in a Christian band. A fan of all things science fiction, his interests range from books and movies to music and games. Online he is known as Ninja Captain Alex and he’s the founder of the Insecure Writer’s Support Group.
Connect with Alex:
Website  |  Insecure Writers Support Group  |  Twitter