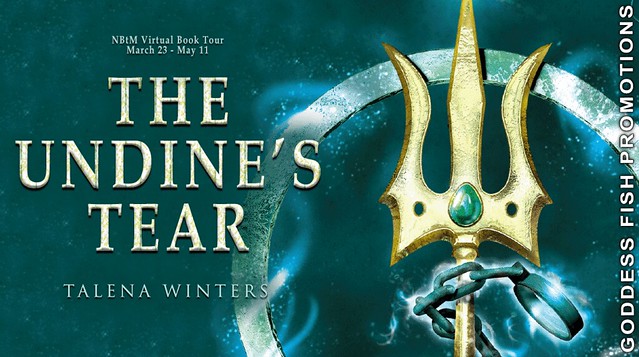 I’m excited to be a part of The Undine's Tear by Talena Winters' Book Tour and to have had the chance to interview Talena. She will be awarding a hardback copy of The Undine's Tear (Rise of the Grigori Book 1) and also The Sphinx's Heart (Rise of the Grigori Book 2) to a randomly drawn winner (International Giveaway) via rafflecopter during the tour.
Let's meet the author first!
What inspired you to write this book?

The initial idea for the world of the undines (UN-deens) came while watching the Australian young adult mermaid show H2O: Just Add Water in 2010. What happened to all the mermen? I wondered. Why must mermaids in most tales find human husbands or drag sailors beneath the waves?

My brain wouldn’t leave that alone, and, for the first time ever, I had an idea for a fiction novel. The only problem was that I didn’t know how to write fiction! This was the idea that inspired me to learn how.

Over the next seven years, I did a ton of research about mermaids, matriarchal societies, ancient myths, the Atlantic Slave Trade, and more, while also taking a course about novel writing and publishing my first two novels (both contemporary). After all the practice and research, I finally had the groundwork in place to tackle this epic fantasy about an all-female mermaid culture that had to capture human men to survive. It would be another two years before I published it. Two years later in November 2021, I published the next volume, The Sphinx’s Heart. I’m currently taking a short break to write some sweet small-town romance before tackling book three.


Tell us three things we’d find if we looked under your heroine’s bed?

Not much, not even dust bunnies. My heroine, Calandra, is a practical, utilitarian sort who likes working with her hands, but she was also raised in a palace. So the servants make sure her room stays spic and span at all times. She has a stone working hobby, though, so I bet she has some interesting crystals and rocks she’s found stashed in the back of her wardrobe, which she doesn’t bother filling with something as frivolous as fancy clothes. And a few data stones, which is her culture’s equivalent of books—she loves to read and learn.

My dad gave me the first three books from the Chronicles of Narnia for my ninth birthday, which was probably the beginning of my love affair with fantasy novels. I bought the rest of the series myself, and have spent the rest of my life looking for books that revive the wonder and magic I felt reading those for the first (or second, or third) time.

Another was The Island of the Blue Dolphins by Scott O’Dell. I read that many times. I was enamoured with the bravery and determination of the female protagonist—she was my Moana. I especially loved that it was based on a true story.

These two novels (and many others) contributed to my lifelong love of both history and fantasy, and to my belief that being a girl didn’t have to be a limitation.


We all have guilty pleasure, do you have any books you can’t get enough of?

Right now, it’s paranormal women’s fiction. I got hooked by Lindsay Buroker’s A Witch in Wolf Wood series, in which I’m all caught up, and I just recently started trying other authors in this genre. Wit, witches, and wolf shifters—I’m hooked.

Besides read? Lol. My “day job” is as a developmental editor and copy writer, so I get to play with stories and help other writers all the time, which I love. I’m also a mom of three teenage boys and a wife to my Prince Charming. We live a quiet life on an acreage in northern Alberta, Canada in a really amazing community. Oh, and I design knitwear patterns in my spare time—my “hobby business.”


What makes you laugh out loud?

Practically everything. Seriously, I’ve been known for my quick, loud, and distinctive laugh my whole life. I see the humour in almost everything, even very serious moments. However, I’m also deeply affected by other people’s pain, so it’s not like I laugh when I shouldn’t—most of the time.

My husband and kids know how to tickle my funny bone best. But I’m also particularly fond of word play, clean stand-up comedy, and sitcoms like Brooklyn Nine-Nineand The IT Crowd. And did I mention the witty paranormal women’s fiction I’ve been reading lately?


Is there anything specific you want to tell readers?

The standalone prequel for the Rise of the Grigori series is available as a free digital download when you sign up for my newsletter. The Waterboy is a novella that tells the origin story of Calandra’s brother, Zale, the male protagonist of the series—the first undine male born in three thousand years. His mother raised him in England, away from her people, and when he discovers his powers, bad things happen that set him on the path of his destiny. You can grab the free eBook by signing up at https://www.talenawinters.com/the-waterboy. It’s also available to purchase on audiobook at that link or on your favourite audiobook platform. 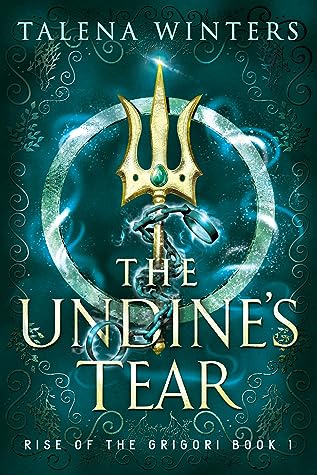 Blurb
She's destined to save the world . . . if she doesn't destroy it first.

Calandra’s destiny is also her doom. As the most powerful healer since the woman who sank Atlantis, she’s been raised to restore the Heartstone that protects her island from humans . . . before she goes Mad like her mother and all the powerful undine healers before her. When she learns she needs both male and female magic to succeed, she becomes desperate—there hasn't been an undine male born for over three thousand years. Instead, she's being pressured to use the siren mind-bond to enslave her childhood friend, the one man she's sworn to risk a death sentence to free.

When Calandra discovers a cryptic message that shows her exiled mother was not only sane but pregnant with a boy, she questions everything she’s been taught to believe. But revealing the horrifying truth of the bonds could tear her island apart—and concealing it could unleash the Earth’s oldest, most destructive enemy. With insanity looming, can Calandra find her brother and save the Heartstone, the man she loves, her people, and the world . . . before she loses control and destroys them all?

The Undine's Tear is the first book in the mind-blowing young adult epic historical fantasy series Rise of the Grigori. Packed with complex characters, lush world-building, gritty action, and impossible odds, this intricately woven tale presents mermaids like you’ve never seen them before. Join Calandra in a search for redemption that will threaten the very fabric of the universe. Dive into the adventure today. 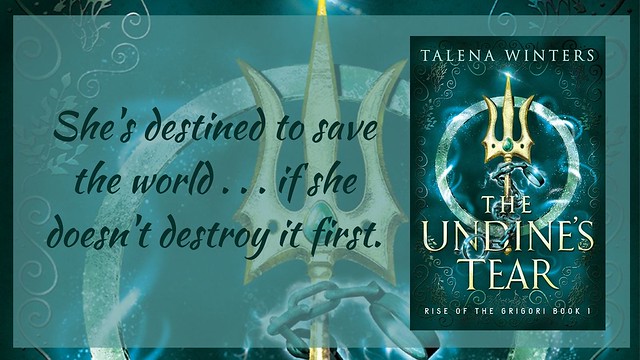 Peek between the pages…
“You are wondering how to gain control of your powers,” Damon said without preamble.

Calandra thought about ignoring him or denying it, but what was the point? This was nothing more than a dream, and the slippery logic of dreams fuzzed her will to keep her more rebellious thoughts to herself.

“You know, I shouldn’t even be talking to you. An Unredeemed male. I could get in big trouble.”

The corners of his mouth curved under his trim goatee.

“And who will report you?” He indicated the blackness around them. “Certainly not I. I exist only in your mind.”

She crossed her arms and cocked her head, studying him. “Have you ever been Redeemed?”

His expression became stony. “Redemption is for humans.”

“Redemption is for men. To make them safe. It just happens that the only men are human.”

Thinking of Osaze’s dread, she wondered again at the morality of it. Uncrossing her arms, she shifted her gaze from Damon’s face to his bronze chest.

“And one of them is my friend.”

“All humans should be controlled,” he replied nonchalantly, drawing nearer. “They have not the patience nor discipline to control themselves. And I am not human, yet I am male.”

She looked up at him, eyes narrowed. “I can see that. What are you? I’ve never seen an undine with golden eyes.”

He smiled knowingly. “Not human. But I could be your friend.”

That same feeling of security and warmth from their first encounter enveloped her, as though he were projecting it from himself intentionally. She frowned, wanting to accept it and shake off her heavy heart, but not daring to trust him yet.

“What do you want from me?”

Damon came near enough to touch her but didn’t, pausing before her with his arms to the sides in a placating gesture.

She wrapped her arms around herself and glared into the blackness beyond him. “Yeah, well, you can’t. Not unless you can tell me how to control powers that could sink an island and heal the Heartstone without going Mad.”

“Little lark,” he said, amusement dripping from his voice like honey from a spoon, “that is exactly what I intend to do.”

Enter the giveaway
a Rafflecopter giveaway 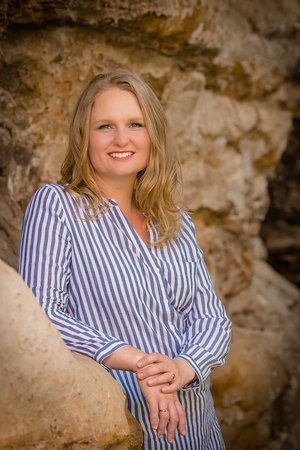 About the author:
Talena Winters is addicted to stories, tea, chocolate, yarn, and silver linings. She writes page-turning fiction for teens and adults in multiple genres, coaches other writers, has written several award-winning songs, and designs knitting patterns under her label My Secret Wish. Master of the ironic GIF response. She currently resides on an acreage in the Peace Country of northern Alberta, Canada, with her husband, three surviving boys, two dogs, and an assortment of farm cats. She would love to be a mermaid when she grows up.
Connect with Talena
Website  |  Instagram  |  Twitter  |  Goodreads  |  Pinterest
Author Facebook  |  My Secret Wish Facebook Page