I'm dlighted to be a tour host for the Relatively Normal Secrets book tour. C. W. Allen will be awarding a $10 Amazon or Barnes and Noble GC to a randomly drawn winner via rafflecopter during the tour. 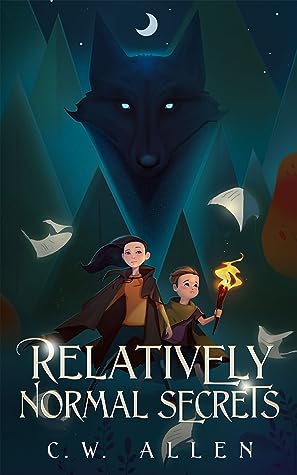 Relatively Normal Secrets
by C. W. Allen
GENRE: Middle Grade Adventure Fantasy
BLURB
Tuesday and Zed Furst are perfectly normal children with perfectly strange parents. Their father won’t discuss his job, their mother never leaves the house without her guard dog, and the topic of the family tree is off limits.
When a last minute “business trip” gets the adults out of the way, Zed and Tuesday decide to get to the bottom of things once and for all. Too bad some thugs with shape-shifting weapons have other ideas. Their escape leaves them trapped in the modern-meets-medieval Falinnheim, where everyone insists their father is a disgraced fugitive. They hope whoever is leaving them coded clues may have some answers, but they’re not sure they’re going to like what they learn.
If they ever want to see their parents again, they’ll need the help of a smuggler with a broken compass, their unusually talented dog, some extremely organized bandits, and a selection of suspiciously misquoted nursery rhymes.
Zed and Tuesday may not have all the answers, but one thing is certain—when it comes to normal, everything is relative.
Grab your copy!
Amazon

Peek between the pages
At lunch, her father was the headlining topic of conversation. Perhaps, everyone joked, he was some kind of secret agent—if anyone found out what he really did all day, he'd have to erase their memories or have them deported to Jupiter. Tuesday made a hasty decision: better to ride the wave of laughter, than drown in it. This was ridiculous, of course!

Of course it was.

Tuesday heaved her backpack onto the lunch table and made a production of searching for a missing paper until the cafeteria’s collective attention bounded on to a new distraction. She retrieved last week’s History assignment and tried to look intensely interested in reviewing it, staring through the page with unfocused eyes while zoning out to the satisfying snapping sound her carrot sticks made, the pitch falling rhythmically as her teeth chopped each one shorter and shorter.

The newly-hatched suspicions about her parents’ routines burrowed in with the rest of the doubts nesting in her brain. It wasn’t just the way they sidestepped any mention of their lives before they had children. It wasn’t just their odd taste in names. It was just—oh, everything.

Her last name should have been different, for one thing; Tuesday was sure of it. Her father wouldn’t say what it might have been, but anything else would have been fine with her, really. Anything that wouldn’t make her a walking punchline. If her parents hadn’t been so weird, her mother would have taken her father’s last name when they got married, like normal people. Then Tuesday could have inherited his name, instead of just his face.

My Thoughts
Relatively Normal Secrets is a creative fast-passed adventure children are sure to enjoy. Siblings, Tuesday and Zed, know their parents are hiding a secret. Tuesday has several theories about what this can be, and Zed is skeptical of them all. Neither are ready for the truth.
The kids are quickly separated from their parents and then transported to an alternate world. This entertaining and quirky story follows them as they try to find answers about their parents and what is happening. I like how the author uses nursery rhymes as puzzles, and I think children will enjoy trying to figure the clues out right along with Tuesday and Zed. (I know I did.) Their dog is such a playful character and a big help to the kids. There's magic woven throughout the story, always a plus!! I especially like how the weapons changed forms. C.W. Allen has a wonderfully descriptive writing style that made it easy to imagine the action and surroundings.
While the crisis in this story is resolved, there are a lot of questions purposely left open for the next book. Fans of sequels are bound to like this.

Enter the Giveaway
a Rafflecopter giveaway

About the author:
C.W. Allen is a Nebraskan by birth, a Texan by experience, a Hoosier by marriage, and a Utahn by geography. She knew she wanted to be a writer the moment she read The Westing Game at age twelve, but took a few detours along the way as a veterinary nurse, an appliance repair secretary, and a homeschool parent.

She recently settled in the high desert of rural Utah with her husband, their three children, and a noisy flock of orphaned ideas. Someday she will create literary homes for all of them. (The ideas, not her family.)

Relatively Normal Secrets (Cinnabar Moth Publishing, Fall 2021) is her debut novel. She writes fantasy novels for tweens, picture books for children, and short stories and poems for former children. Her work will appear in numerous anthologies in 2021. She is also a frequent guest presenter at writing conferences and club meetings, which helps her procrastinate knuckling down to any actual writing.

Keep up with her latest projects at her website: cwallenbooks.com
She is much funnier on Twitter than in person: twitter.com/cwallenbooks
Author’s page Cinnabar Moth Publishing LLC https://cinnabarmoth.com/cw-allen/