Friends to the End Inspiration and Excerpts 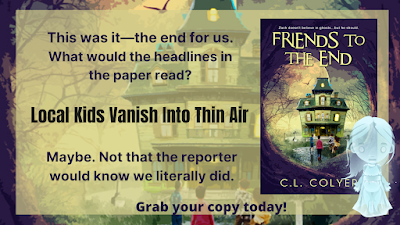 I'm still celebrating the release of FRIENDS TO THE END. Today, I'm sharing a few new excerpts and the inspiration behind my brave protagonist.
The idea for the characters in this book came first. At the time, my sons had lost a few of their friends to various tragedies. Then there were nightly news stories about the senseless shootings of innocent people, some of the victims being children. Zachary Thompson was born from the idea of wanting to write a story that helped kids deal with loss, but I didn't want it to be an issues book. I wanted it to be a way to escape reality, even if just for a little while. The idea to tell Zach's story through a ghost story came later.
Friends to the End is a story about friendship, confronting one’s greatest fears, and finding the inner strength needed to face the unknown, which comes in handy when one fights ghosts.

Peek between the pages: 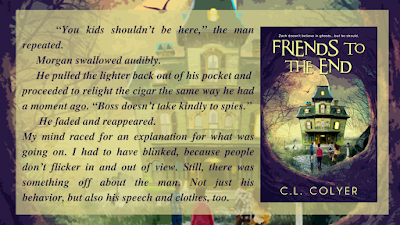 One more peek between the pages...
My bewildered gaze slithered from Dom to Josh, finally coming to a stop on Morgan as I tried to decide if they were crazy.

“If the house is invisible, how do you expect to find it?” I asked.

Morgan sat on the stoop next to me. “It’s not always invisible. My brothers saw it once. They said it’s a big house with a long porch. It vanished before they could set foot on the first step, and I’m glad, too.”

“Why? What would have happened if they were on the steps?” I asked. Not because I believed an old ghost story had any truth to it, but I was curious to know what she’d say.

Morgan had to pick her jaw up from the walkway before she could answer, and when she did her voice came out in a high-pitched squeak. “If they had been on the porch or worse—” she swallowed loudly “—inside, they would have disappeared with it.”
Did I mention there's still time to enter the release celebration giveaway? 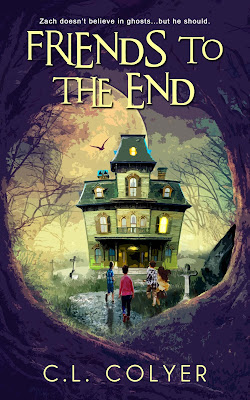 Twelve-year-old Zach is convinced he’ll never be happy without his best friend Jeremy by his side. But both of their lives changed with a bang five months ago, and as far as Zach’s concerned, it’s his fault Jeremy will never see his twelfth birthday.

When Zach moves with his family to a Chicago suburb, he quickly becomes friends with a group of thrill-seeking kids trying to find a disappearing haunted house. But Zach’s not worried. He doesn’t believe in ghosts, so he follows them into a wild, dangerous encounter that becomes a battle to decide what’s real and what’s not.

ENTER THE GIVEAWAY!
a Rafflecopter giveaway