Hi! I'm thrilled to have Hellen C. Johannes with me today. We're chatting about writing, books, and a little about her. Plus, she shared an excerpt from her adorable chapter book, Frederick Fly-Catcher.

I grew up with Fairy Tales (The Big Golden Book), Disney movies, and Looney Tunes, loves that didn’t diminish with adulthood. When my children came along, our house was filled with books, and many an evening was spent sharing a story or an animated film. Somehow it seemed only natural that I would decide to write a story of my own, one I could envision as an animated film with lots of action and humor.


How did you come up with the concept and/or characters for the book?

We had been living in the vicinity of ponds and could hear the frogs at night, and that may have been the inspiration for the setting. The characters, however, simply presented themselves on the page—as my characters tend to do—revealing their personalities as they interacted with each other. My job was to make them as frog-like as possible, to perceive the world through their senses, to describe things from their experiences.

Give me a mystery to solve or a save-the-world plot, throw in some romance or wow me with some totally engaging characters and a dash of humor and I’m hooked. My recent book list includes The Murderbot Diaries, Project Hail Mary, The Thursday Murder Club, the Percy Jackson/Heroes of Olympus/Trials of Apollo series, Claire LeGrand’s Thornlight, Susan Elizabeth Phillips’ Dance Away With Me, Nora Roberts’ Whiskey Beach, Penny Reid’sBeard Science, Alan Bradley’s Flavia DeLuce series, TE Kinsey’s Lady Hardcastle series, Dorothy Sayers’ Lord Peter Wimsey series, to name a few.

I’m a military brat, so I grew up moving. My father never hesitates to tell people I went to 12 schools K-12 and still made the honor roll in each. I became an expert packer, keeping safe the few constant items that, when I unpacked, meant ‘home’ for me. My first places to locate, after my new school, were the local library, the movie theater, and the comic book store. Idyllic memories from my childhood involve spending my allowance on Saturday matinees or the latest Scrooge McDuck and nephews Huey, Dewey, and Louie adventure (later to be known as Ducktales). 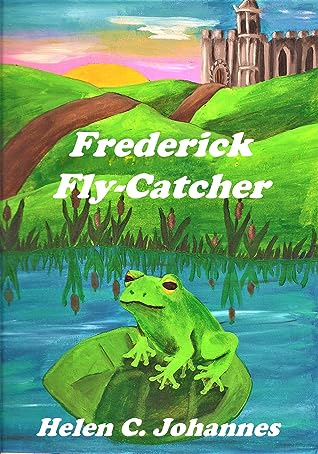 Frederick Fly-Catcher
Author: Helen C. Johannes
Genre: Children’s Fantasy Chapter Book
Blurb
“A fun adventure that was a hit with my nine-year-old!”
What happens when Frederick, a champion fly-catcher, is confronted with a human? After all, humans are dangerous! And worse, this human is carrying a thing of troublesome, powerful magic. What if Frederick can’t get it to stop?
This fast-paced chapter book will entice young readers to keep turning pages to find out what happens next. Connecting with Frederick’s frog’s-eye-view reminds children to treat all creatures with respect and to be open to friendships with new or different people. Parents can use the story events as jumping-off points to talk with children about problem-solving and teamwork strategies as well as simply being kind.
“The best thing I could do was to relax and enjoy the ride, so that’s exactly what I did.”
Grab your copy today!
Amazon  |  Nook  |  Kobo  |  Apple  |  Universal link 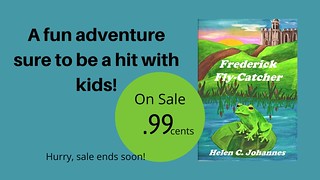 Excerpt
Air bubbles roared past Frederick. Horse legs crashed through the water all around him. Heart hammering, he dove for the mucky bottom.

Kersplash! Something big plunged past him.

Frederick tucked his long legs, rolled, and kicked away. One cattail stem smacked him in the face, another in the knee. He pulled himself across the third and braced his legs against it while it swayed.

He opened his eyes at the roiling surface, head out and body in. His nose smarted. Whatever had thundered through the pond was gone. Already the algae was closing ranks, filling the holes punched into it.

Frederick heaved a sigh and crawled onto a floating twig. He looked around for his friends—and froze.

From the reeds opposite, a pair of eyes stared out.

Frederick pretended he was part of the twig.

The eyes blinked. They widened to June bug size.

Huh? What does something big enough to stir up a pond have to fear?

The eyes looked beyond him, over the cattails. It was thundering again. Louder. More horses. The blue eyes opposite sank into the reeds.

“And went out here!”

Three horses plunged into the water and galloped through the pond.

Frederick hung on while his twig bounced back and forth with the sloshing waves.

When the water stilled, Frederick looked straight at the reeds.

The blue eyes had surfaced. Now they rose. And rose. Over the top of the reeds appeared a thin, green-streaked face.

A human! A small human!

About the Author:
Helen C. Johannes writes award-winning fantasy inspired by the fairy tales she grew up reading and the amazing historical places she’s visited in England, Ireland, Scotland and Germany. Multi-published, she writes tales of adventure and romance in fully realized worlds sprung from pure imagination and a lifelong interest in history, culture, and literature. Warriors on horseback, women who refuse to sit idly at home, and passion that cannot be denied or outrun—that’s what readers will find in her adult books: Brave men, bold women—hearts in search of home. Fast-paced, fanciful, family-friendly fun inspired by her own children is the hallmark of Frederick Fly-Catcher.

Email ThisBlogThis!Share to TwitterShare to FacebookShare to Pinterest
Labels: children's