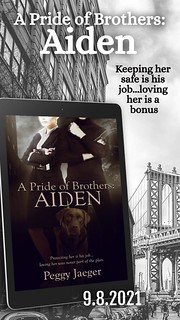 I'm excited to welcome Peggy Jaeger, author of steamy romance and more, to my blog. She's telling us a little about the research she did before writing A Pride of Brothers: Aiden, a little about herself, and sharing a peek between the pages of her new release. So without further ado, let's jump into the interview.


Tell us about the research you did before writing this book.

Since Aiden is a Private Investigator I wanted to make sure I got the details of his job correct, so I did extensive research on line about what PIS can and can’t do, legally. Move and TV PIs break the law every single day according to the rule I discovered they must abide by. For instance, they can’t just tap someone’s phone to gather evidence. And they are not allowed to photograph people in the privacy of their homes or hotel rooms. This was interesting because every single PI show I’ve ever seen shows them doing just that.

Who is your favorite author?

Hands down it is Nora Roberts and her alter ego J.D. Robb. I lovelovelove her In Death books because they are a long running series about a married couple who, on paper, don’t look like they should ever be together ( A by the book cop and a former criminal). But the Roarke and Eve are written so perfectly that the series is a joy to read and re-read. 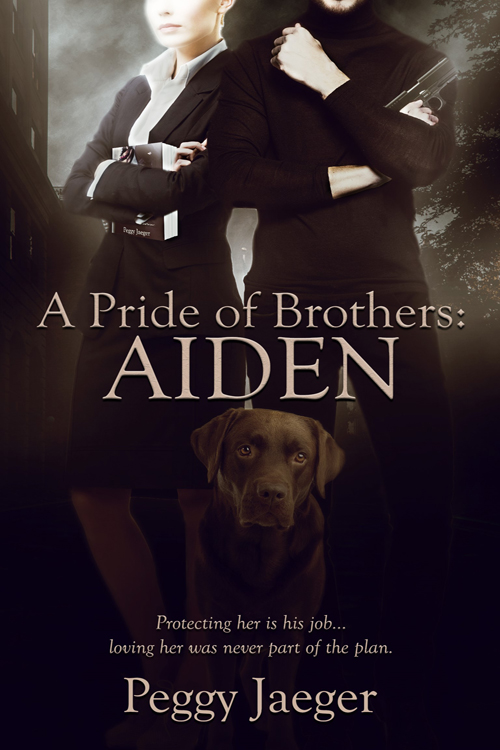 A PRIDE OF BROTHERS: AIDEN
Author: Peggy Jaeger
Genre: Romantic Suspense, NYC romance, Forced proximity
Heat level (if over PG13): R - steamy
About the book
Blurb: Lexi Buckley wants answers about her younger sister's death. The police have labeled it a suicide, but Lexi doesn't believe it. Stymied in her investigation, she doesn't know where to turn next. After a chance encounter with a private investigator, she thinks her prayers have been answered.
Aiden Keane has never been an answer to a prayer before, but he agrees to help Lexi. A quirky combo of brains and beauty, the pixie blonde makes him feel things no professional ever should for a client.
When their investigation puts Lexi's life in jeopardy, her safety becomes his number one priority. The hard part is not falling for her.
Read it today!
Amazon  |  Barnes & Noble  |  Apple

Peek between the pages
Were you close with your sister?” Aiden asked.

Not the way we should have been. Not at the end.

“We had a sizable age difference between us. Almost ten years. I was the big sis. The oldest.” Her lips trembled when she pulled them into a sad line. Rolling her eyes she added, “The bossy one, according to her. She was the baby and took full advantage of her status from the moment she realized it.”

“And rightly so.” The corners of his eyes crinkled. “I’m the youngest of my brothers and I’ll can tell you with one hundred percent honesty, my oldest brother is the bossiest one of us. I think it comes with birth order. Although he takes his so called right uber-seriously. Especially at work.”

This time her grin was steadier. “What kind of business do you all own together?”

“We a run a private security company.”

“Personal bodyguards, if a client needs protection from something. Background checks for employers. Mostly we do investigations.”

He laughed. “Nothing so glamorous. The fast cars and hot babes are all fantasy. It’s a lot of boring research, computer work, and surveillance, but yeah, you could say I’m a private eye.”

Lexi’s entire mood turned on his words. The sorrow flew, the hurt dissolved. Even her nervous trivia-speak went dormant. She sat bolt upright, her knees bumping against the tabletop when she shifted. Excitement shot from her system as she turned her body, placed a hand across his forearm and declared, “Oh, my God. You’re the answer to my prayers.” 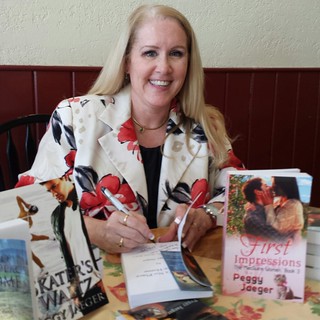 About the author: Peggy Jaeger writes contemporary romances and rom coms about strong women, the families who support them, and the men who can’t live without them.

Family and food play huge roles in Peggy’s stories because she believes there is nothing that holds a family structure together like sharing a meal…or two…or ten. Dotted with humor and characters that are as real as they are loving, Peggy brings all aspects of life into her stories: life, death, sibling rivalry, illness, and the desire for everyone to find their own happily ever after. Growing up the only child of divorced parents she longed for sisters, brothers and a family that vowed to stick together no matter what came their way. Through her books, she has created the families she wanted as that lonely child.

As a lifelong diarist, she caught the blogging bug early on, and you can visit her at peggyjaeger.com where she blogs daily about life, writing, and stuff that makes her go "What??!"