Welcome to my blog!
I'm excited to welcome fellow Rose Randy Overbeck back to my blog. If you missed his guest post on who needs love anyway, you can read it here. Today, Randy shared the inspiration behind his series, a little about himself, and a peek between the pages of SCARLET AT CRYSTAL RIVER.
Without further adu...

Randy, what inspired you to write this book?

In 2019, the Wild Rose Press launched the Haunted Shores Mysteries with my story about Darrell, the teacher and coach who sees ghosts and the ghost of a huge black student haunting a high school. BLOOD ON THE CHESAPEAKE was so well received by readers and reviewers that it became a #1 Amazon best seller! 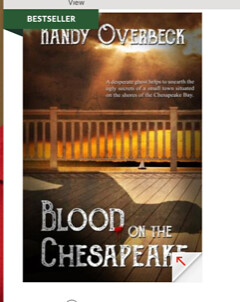 Then, last year, the publisher released CRIMSON AT CAPE MAY in the middle of the pandemic, a story featuring the specter of a bride murdered on her wedding night, who stalks Darrell, still bleeding in her white wedding dress. This second entry has won three national awards and, by now, the series has amassed more than a dozen 5-Star reviews from national and international reviewers.
As I pondered the third installment, I realized I wanted to keep all the critical elements of the series—cold case murder, ghost, romance and resort—but I also wanted to give my readers something different. On a break from my brainstorming, I was thumbing through family pictures and came upon a photo of my grandkids playing on a playground. 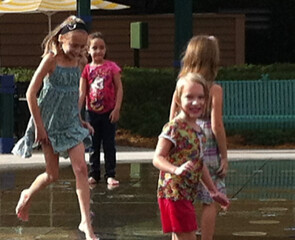 Staring at the images of the smiling faces, it hit me. What if the mystery was about the death of two kids? Two kids whose ghosts haunt Darrell to find justice for them?
The rest, as they say, is history. Our last trip—pre-pandemic—was to the Florida Gulf coast to find a suitable location for my narrative and I found a great one. 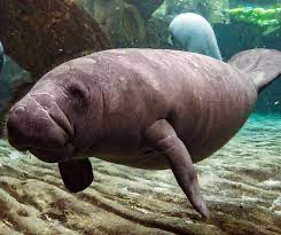 Thus, SCARLET AT CRYSTAL RIVER was born. Well, that and hundreds of hours of writing, revising, re-writing, editing, re-writing…well, you get the picture. I’m pretty happy with the end product and I hope readers are too.

Who are your favorite authors?

I have many favorite authors, but the one I’d like to share is William Kent Kreuger, award-winning author of the best-selling Cork O’Connor series. Not only is Kent a remarkable mystery writers with intriguing stories set in stunning locations populated with unforgettable characters, he is also a supportive writing colleague. I’ve had the pleasure to learn from him at a few writing conferences and I always come away inspired and with new, practical ideas. Also, he helped me get started by providing a great blurb for my first, BLOOD ON THE CHESAPEAKE.

“For those who enjoy a mixed bag in the books they read, Randy Overbeck has performed a nifty literary feat. Within a web woven of threads from a number of genres—a bit of romance, a lot of mystery, and a good deal of old-fashioned ghost whispering—he’s written a pretty solid social commentary. Blood on the Chesapeake is a tale to be savored in a darkened room, with an eye to all the possibilities lurking just out of sight. The first of three in a projected trilogy, it’ll be a hard wait for the books that follow.”

How could he not be my favorite? And his writing keeps getting better and better, like I strive to accomplish. His works have won awards like the Edgar, the highest award for mystery writers, and legions of fans. I’m proud to be among them.


Tell us something unique/quirky about yourself.

I don’t know if this is quirky or unique, but here goes. I know many writers enjoy, prefer and are happiest as hermits, just them and their computers, pecking away to make their stories come alive. While I like my alone time—and need hours of it to create—I also love being out among “the people.” I’m fortunate to be a comfortable—and pretty good—speaker and I’ve had the privilege of giving more than 175 “author talks” to all kinds of groups and organizations, large and small over the past several years. 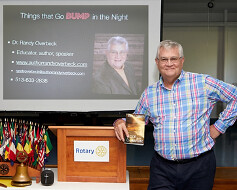 I love the challenge to hook the participants and I thrive on the chance to engage everyone in the audience. Not that the pandemic is easing—we hope and pray—I have twenty more scheduled in the next few months and I can’t wait to get back out there. 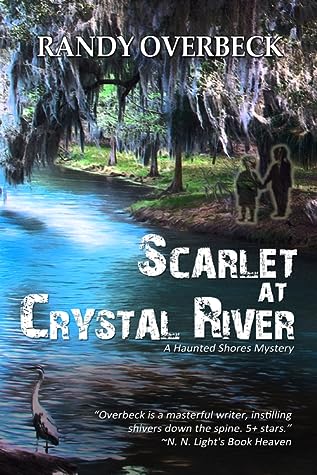 SCARLET AT CRYSTAL RIVER
Author: Randy Overbeck
Genre: Paranormal Mystery
Blurb
All Darrell Henshaw wanted was to enjoy his honeymoon with his beautiful wife, Erin, in the charming town of Crystal River on the sunny Gulf Coast of Florida. Only a pair of ghosts decide to intrude on their celebration. And not just any ghosts, the spirits of two young Latino children. Unwilling at first to derail the honeymoon for yet another ghost hunt, Darrell finally concedes when a painting of the kids comes alive, weeping and pleading for his help.
When he and Erin track down the artist, they discover the children’s family were migrant workers the next county over. But when they travel there, their questions about the kids gets their car shot up and Erin hospitalized. Torn between fear and rage, Darrell must decide how far he will go to get justice for two young children he never even knew.
Grab your copy today
Amazon |  Barnes & Noble

Peek between the page

Darrell ran harder, finishing the loop and circling back to Erin. She was so engrossed in her paperback he managed to sneak up behind her. He leaned and in and grabbed another long kiss.

She kissed him back, smiling. “Now that’s better than a little fictional romance.” She got up and stretched her long legs.

“You ready for some waves?” he asked.

“You’re on.” Darrell gave a gentlemanly wave of his hand.

Erin took off like a shot, and Darrell hurried after her. Since the beach was small, they covered the same ground Darrell had a few minutes earlier, passing the family sandcastle builders, another jogger, and the same strolling couples. As usual, she was quick, and he had to hustle to keep up, using some fancy footwork to sidestep sunbathers as they ran. When they got to the north end of the beach where Darrell had turned to double back, Erin headed for a little spit of land that strutted out into the water. He looked beyond and saw what she was headed for. Accelerating, he passed her.

Ahead, at the far end of the beach, a pair of young kids, he’d guess about six, sat in the sand as the waves rolled over their legs. Their small hands busied with a primitive sandcastle. One had long, brown hair tied into pigtails, and the other had a full head of brown hair, unkempt and in need of a trim. He came up to them and stopped, Erin a few seconds behind.

The kids wore street clothes, not swimsuits, but he didn’t think much about it. Then he noticed something about the young boy. His right leg was stuck out at a grotesque angle, as if it had been broken and never set. Both kids giggled at the gurgling water that rolled up around their bare feet and pooled in the makeshift moat they’d dug around their sand creation. The castle was crude, a nearly round construction with seashells sticking up like turrets. The two kids glanced up, caramel eyes wide and pleading with half smiles of white teeth.

In unison, they said, “Ayudaños?”

“Cute castle, huh?” Erin stared at the sand and looked up at Darrell. “I wonder who made it?” Her eyes roamed around the area. “Out here on this spit of land it isn’t going to last very long.”

“Those kids—” he started, pointing to the pair. When he looked down, the sandcastle sat alone, the gulf water flowing around the construction and into the crude moat.

His glance darted out to the waves, thinking they’d abandoned their work and ran into the water, even in their street clothes, though he wondered how the boy could have run.

No girl or boy.

“What’d you say?” Erin asked, her gaze meeting his.

The ghosts. Erin hadn’t seen them!

Shit, he couldn’t tell her. Not now. Not here.

“Nothing,” he managed around the lump in his throat and glanced back down at the sand.

There at his feet, the crude sand construction they’d been working on, complete with the three blue seashells sticking out of the top, sat alone on the sand. He reached down and grabbed one of the small seashells as the prickle on his neck returned and sizzled. Then he sensed something else, something ominous. No, not ominous, malevolent. More of Natalia’s warning came back to him.

“I see a malevolence, a great danger lurking nearby.”

A big wave rushed in, rolling over their ankles and leveling the mound of sand, leaving the beach empty. As if nothing had ever been there.

About the author: Dr. Randy Overbeck is an award-winning educator, author and speaker. As an educator, he served children for four decades in a range of roles captured in his novels, from teacher and coach to principal and superintendent. His thriller, Leave No Child Behind (2012) and his recent mysteries, the Amazon No. 1 Best Seller, Blood on the Chesapeake, Crimson at Cape May and Scarlet at Crystal River have earned five star reviews and garnered national awards including “Thriller of the Year--ReadersFavorite.com, “Gold Award”—Literary Titan, “Mystery of the Year”—ReadersView.com and “Crowned Heart of Excellence”—InD’Tale Magazine. As a member of the Mystery Writers of America, Dr. Overbeck is an active member of the literary community, contributing to a writers’ critique group, serving as a mentor to emerging writers and participating in writing conferences such as Sleuthfest, Killer Nashville and the Midwest Writers Workshop. When he’s not writing or researching his next exciting novel or sharing his presentation, “Things Still Go Bump in the Night,” he’s spending time with his incredible family of wife, three children (and their spouses) and seven wonderful grandchildren.
Connect with Randy:
Twitter  |  Facebook  |  Instagram  |  YouTube
Tik Tok @authorrandyo