I'm thrilled to have Sydney Winard with us today. Sydney is the author of intriguing paranormal and fantasy romance. I thoroughly enjoyed her novels Root Brew Float and Blood Born, and then I saw she has a book on fae. I can't wait to read it! And the cover is stunning!
Let's jump right into the interview...


Can you share with us what are you working on now?

I’m currently writing book 3 in the Sunlight and Shadows Series. I can’t tell you who it’s about, otherwise it will give away some big spoilers! But I have found it a challenge to write a story about two very broken people with dark secrets, and how they overcome the past that still haunts each of their lives.


What's your favorite genre and why?

I don’t have a specific genre I like to read the most. I’m more of a mood reader and will read the genre that best suits my current reading mood. Lately, I’ve been on a historical romance kick, reading books set in the late 1800s. Currently, I’m reading a novella by Amber Daulton titled Forever Winter. Other genres I enjoy are paranormal, fantasy, and contemporary with a heavy romantic element.


It's always fun to learn more about the authors we love. Tell us something about yourself and how you became an author.

I’ve always wanted to be an author, and I was weirdly obsessed with books and author events even at a young age. Christopher Paolini was my author idle for a long time, continuing to inspire me to reach for my goal of one day becoming an author. I wrote story after story, needing that constant creative release, until I started becoming serious about writing and wanted to cross that line from writer to author. I never intended to write about vampires for my debut series, but when the muse calls, you listen. I’ve written paranormal and fantasy romance, with some historical fiction sprinkled in there. I just go wherever the muse calls me! I’m getting an itch for writing about dragon shifters, so we’ll see if that happens! 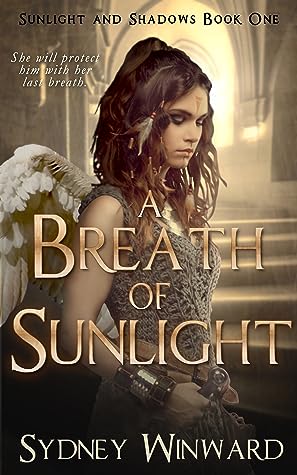 A BREATH OF SUNLIGHT
by Sydney Winward
She will protect him with her last breath.
Blurb:
Don’t show compassion for men. Never save a man’s life. And no matter what, never fall in love with someone you must ultimately kill. But some rules are meant to be broken, even if it means risking your life by betraying your valkyrie sisters.
The plan was simple—attack the Pits, kill the male slaves, save the women. But when Skaja runs into a fae man she can’t kill, she instead breaks all the rules to save him.
Prince Calle was sold into slavery by his jealous brother, and he would do anything to taste freedom again, even put his trust in a dangerous valkyrie. To protect his people and gain the throne, he and Skaja must trust each other. But neither of them expected trust to turn into something more, and the cost of love has a much steeper price than either of them anticipated.
GRAB YOUR COPY TODAY!
Peek between the pages…
“This is beautiful,” she murmured. “What does it mean?”


He watched, transfixed as she touched him. It had been so long since he’d touched another, other than embracing Cian a couple of months ago, however fleeting. He craved the contact that made him feel alive again.

“It’s tradition for Sun Fae to cover their scars with tattoos,” he explained. “Only, we do not get to choose the tattoo, nor the accompanying color. Gold is the highest honor. Next is silver. Then bronze. All the way to black, which is disgraceful. This…” He traced a part of the star but made sure not to brush against her as he did it. “…is a word repeated over and over to form the star. It says ‘sacrifice’ in our tongue.” 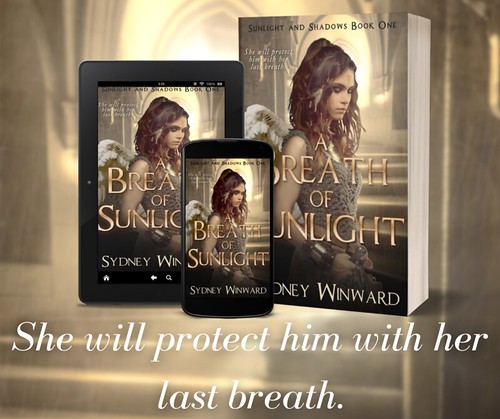 One more peek (because sometimes, one just isn’t enough!)…
Calle gasped and shot up into a sitting position. He clawed at his throat to remove the boot, but instead of finding a rough leather boot, he touched soft, warm skin.

“Shh,” Skaja soothed as she touched his hands, his face, his hair. “It was only a bad dream.”

Her face finally came into focus in the darkness. Pinched, concerned brows. Pursed lips. Hair falling across her forehead.

He shook his head, suddenly aware of the perspiration that clung to his skin. His back ached where he’d been whipped. His throat still burned for air. The slave brand on his forearm rippled with heat. “N-n-no. It w-w-wasn’t a d-d-dream.”

“It was,” she said in a soothing tone, and for the first time since they’d met, her eyes were kind and gentle. Her fingers stroked either side of his hair. She was touching him… And not just an uncertain, awkward touch. A compassionate caring lingered in her caress, and he couldn’t help but lean into her hand.

A pause. But then her fingers continued their exploration. Her light touch skimmed his hair, his eyebrows, his nose, his cheekbones. They hesitantly touched his earlobe before she more daringly traced the shape of his long, pointed ear.

His heart slowed into something calmer. Something safer. The fear in his soul settled to the bottom of a clear, placid lake. The pain in his back and throat ebbed. The burn on his forearm died slowly like a waning fever.

He breathed in Skaja’s scent of jasmine and cool midnight skies and breathed out a river of calm. She was right. It was only a dream.

Yet, it had felt so real.

A flash of darkness passed across his mind, and as if he once again found himself in the deep ravine of the Pits, his hands began trembling. Skaja’s gentle touch trailed from his ear, to his shoulder, down his arm, before she clasped his hand. Her touch felt so good. Like a breath of sunlight after being caged in the darkness for so long. 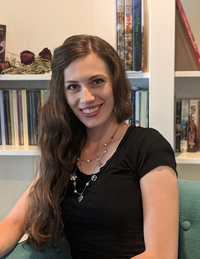 About the author:
Sydney Winward is a fantasy and paranormal romance author who dabbles in the occasional historical fiction. She loves building complex worlds filled with magic, strong characters, and emotional stories that can make you laugh and cry.

Sydney is the author of The Bloodborn Series, and when she’s not writing, she’s reading, thinking about stories, or going on adventures with her children. She lives in Utah with her husband, two amazing kids, and one stubborn fish.
Connect with Sydney
Twitter  |  Facebook  |   Instagram  |  Website
Posted by Cherie Colyer at 6:00 AM