I'm very excited to be a stop on the Oppression's Book Launch Party. (Throws confetti and releases a hundred brightly colored balloons.) I chose to write a post about fate and whether or not I think things really do happen for a reason.


I think fate is closely related to things happening for a reason. I always have. For instance, have you ever been having a bad week, maybe you’re feeling blah or nothing has gone right, you stop at the store to pick up milk and someone in line behind you says the nicest thing to you? Or maybe a stranger does a small act of kindness that reminds you things really aren't that bad.
Maybe it was Fate who burnt dinner (she does that sometimes). Now you have to grab fast food where you run into an old friend you haven’t seen in years. You might realize that slightly eccentric co-worker who seemed to have been plopped into your life for a few short months offered the friendship you needed at the time. And maybe the reason you never got a chance to talk to that really cute guy at the party was because the timing wasn’t right. You just have to trust that Fate will make sure you bump into him again if it was meant to be.
One of my personal favorite examples of things happening for a reason is when I’m late for an appointment and end up stuck driving behind the little old lady who insists on driving five miles under the speed limit. Then we pass a cop who has set up a speed trap. If it weren’t for grandma I might have been having a nice long chat with the officer.
IDK, the list of things happening for a reason can get very long. Let me know if you believe in fate.
Don't forget to stop by Jessica's blog to find out how to enter to win some awesome prizes. 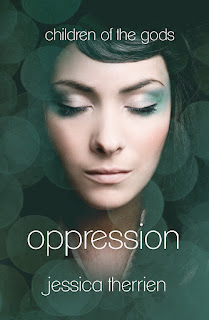 Oppression (Children of the Gods #1)
by Jessica Therrien
Elyse knows what it means to keep a secret. She's been keeping secrets her whole life. Two, actually. First, that she ages five times slower than the average person, so that while she looks eighteen years old, she's closer to eighty. Second, that her blood has a mysterious power to heal. For Elyse, these things don't make her special. They make life dangerous. After the death of her parents, she's been careful to keep her secret as closely guarded as possible. Now, only one other person in the world knows about her age and ability. Or so she thinks. Elyse is not the only one keeping secrets. There are others like her all over the world, descendants of the very people the Greeks considered gods. She is one of them, and they have been waiting for her for a long time. Some are waiting for her to put an end to centuries of traditions that have oppressed their people under the guise of safeguarding them. Others are determined to keep her from doing just that. But for Elyse, the game is just beginning - and she's not entirely willing to play by their rules.
Where to find Jessica
Blog | Facebook | Twitter | GoodReads
~
Posted by Cherie Colyer at 5:00 AM