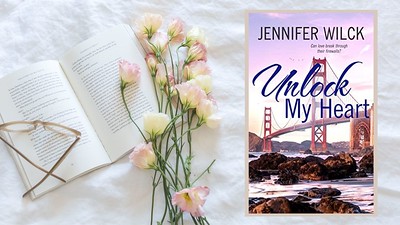 It's such a pleasure to welcome author Jennifer Wilck to my blog. Her latest book, Unlock My Heart, is now available. Jennifer shared an excerpt, but before we get to that, let's meet the author.

This is the second book in my Scarred Hearts series (although each can be read as a standalone). The series follows four best friends who have amassed a tremendous amount of wealth in their chosen careers, and with their extra money, they invest in philanthropic organizations. But as wealthy as they are, they’ve been unlucky in love, until they each meet a woman who turns their world upside down.

For this story, I wanted to make the hero hard of hearing. Although I’ve made Ted’s condition worse, his lack of hearing is similar to mine. Until I started wearing hearing aids (and sometimes, even with them), I’d often mishear things, with sometimes comical results. And I started thinking what would happen if a successful, powerful man had to hide his disability so people wouldn’t think he was stupid? And what kind of woman would fall for him/would he fall for?

I’m a big fan of strong heroines, so making Abby a tech wizard was a lot of fun. I interviewed a friend of mine from high school for the technology information and I hope I got it all right. But I love Abby’s strength and determination, especially in the face of all the adversity I throw her way.

I just read Life After Life by Kate Atkinson and that book has stayed with me for months. It’s about a woman who lives multiple lives—every time she messes up, she dies and is reborn, reliving the same life but making a different choice this time around. It’s fascinating and confusing and I could not put the book down. Not my usual choice, but I’m so glad I picked it up in the bookstore and I highly recommend it.

Well, my husband and I are finally empty nesters. We have two daughters, one who’s a junior in college and one who’s a first-year law student, and after lots of remote learning due to Covid, and a lot more time at home than any of us expected, they are finally back at school. So we are both working from home and getting used to just having the two of us around. We spend a lot of time together when we’re not working—hiking, fixing things around the house, traveling, and just getting reacquainted after years as “parents.”

On my own, I like to read, photograph nature, cook/bake, and socialize with friends. 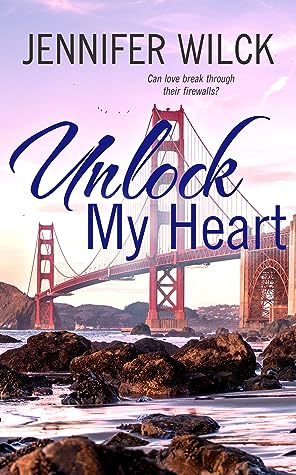 Unlock My Heart
Author: Jennifer Wilck
Genre: contemporary romance
Heat level (if over PG13): steamy
Blurb
Abby Marlow, computer security expert, lands a job at the best IT security firm in the country. Her sole focus is financial independence so she never has to rely on others again, especially a man. But why does her boss make her wires short circuit?

Ted Endicott, CEO and founder of the IT security firm, is hard of hearing. Although an expert in his field, he’s still uncomfortable admitting his difficulty hearing to his clients or employees. So why is he willing to accept Abby’s help?

As Ted and Abby work together, barriers fall away, and soon the lines blur between colleagues and lovers. But a security glitch in a client's system indicates one of his employees is the hacker, and all signs point to Abby. Can they get past the suspicion and find a future together?

Peek between the Pages
Ted grasped Abby as she started to topple. Pulling her tight against him, he skated them to the rail and leaned against it, giving her time to get her feet back under her. Greg was right; Ted shouldn’t hold her like this, but no one was around and with Abby everything felt right.

And he was enjoying her body against his. He stifled a groan. Soft breasts, delicate bones, strawberry-scented hair. He wanted her, more than he’d ever wanted another woman.

She’d bragged about his success to her mother? For a man who’d grown up with a dad who called him stupid, Abby’s brag was more of an aphrodisiac than any sexy model ever could be.

He hugged her to him on the pretense of making sure she remained upright and waited for her to pull away.

Her lips moved, and he studied them, unable to hear her with the background music, the whoosh of air as they glided, the voices of the skaters, and traffic noise. He thought she said “thanks,” and he nodded. When she started to speak again, he took his finger and placed it over her lips. They were velvety soft and pink, and he would have given anything to kiss them.

Instead, he shook his head. “I can’t hear you. And lip reading is exhausting.”

He expected the usual shame to creep in. Maybe because she was out of her element here on the ice and relied on him. She clutched his hand as he guided them slowly over the ice. Maybe it was because he saw no pity. In fact, desire flashed. She blinked, and it was gone. But he’d seen it.

He could spend their entire time together wondering what conversations he missed. He could worry about what she thought, or about whether or not the CEO of the company should skate this close to his employee.

Or he could skate.

He held her close again, and they circled the rink. The cold air reddened her cheeks and nose. His hands should have been cold without gloves, but they weren’t. Holding Abby, melding their bodies together, created a furnace between them. He was surprised the ice beneath their blades didn’t melt.

They circled the rink once, twice, three times, and on their fourth turn, snowflakes fell. The sky glowed from the reflection of the lights on the clouds, which were so low, it seemed as if the tops of the buildings supported them. Abby shivered. He drew her close again as he stopped at the railing.

She shook her head no.

If she wasn’t cold...he leaned toward her, and her eyes darkened. Her lips parted, and his heart thumped in his chest. He wanted to kiss her more than he wanted to be able to hear the sound of his name on her lips.

She reached out and traced her finger across his cheekbone. When she pulled back, there was liquid from a melting snowflake on the tip, and a blaze of heat across his cheek.

He caught the gist, and his shock at her comment broke the spell. “You’ve never seen snow?”

She shook her head. He wanted to ask her where she’d grown up, but this wasn’t the place because of the noise of the tourists. Besides, it was late, and if he weren’t careful, he’d do something he shouldn’t.

Like kiss her next to the golden statue in Rockefeller Center.

He steered them toward the exit, and they returned their skates. Moving away from the noise of the rink, Ted took a deep breath when he could hear again.

“You want to walk in the snow or cab it?” he asked.

The look of joy on her face was contagious as she held her hands out to collect snowflakes. He’d grown up in Ohio. Snow was nothing new to him, although he remembered how much he’d loved to play in it. He’d built huge forts in the snowdrifts, where sound was muted and light filtered through the flakes. The snowy walls offered a natural barrier and allowed him to dream of days when he’d be far away. 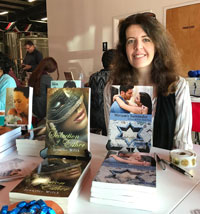 About the author: Jennifer started telling herself stories as a little girl when she couldn’t fall asleep at night. Pretty soon, her head was filled with these stories and the characters that populated them. Even as an adult, she thinks about the characters and stories at night before she falls asleep or walking the dog. Eventually, she started writing them down. Her favorite stories to write are those with smart, sassy, independent heroines; handsome, strong and slightly vulnerable heroes; and her stories always end with happily ever after.

In the real world, she’s the mother of two amazing daughters and wife of one of the smartest men she knows. She believes humor is the only way to get through the day and does not believe in sharing her chocolate.

Jennifer Wilck is an award-winning contemporary romance author for readers who are passionate about love, laughter, and happily ever after. Known for writing both Jewish and non-Jewish romances, her books feature damaged heroes, sassy and independent heroines, witty banter and hot chemistry. Jennifer’s ability to transport the reader into the scene, create characters the reader will fall in love with, and evoke a roller coaster of emotions, will hook you from the first page. You can find her books at all major online retailers in a variety of formats.