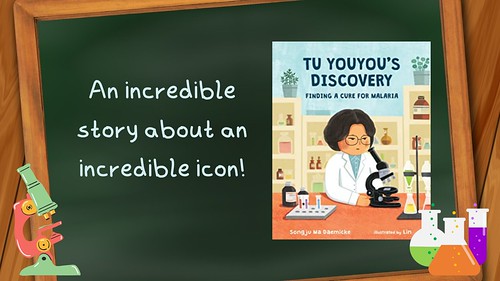 Congrats to Songju Ma Daemick, award winning author, on her new release Tu Youyou's Discovery: Finding a Cure for Malaria. Songju is a Chinese American children's book writer. Her book, illustrated by Lin, is an own voice Women in STEM book.
Please help me welcome Songju.


Songju, can you tell us what inspired you to write this book?
My inspiration to writing this book was from a TV show. In the beginning of 2019, I watched a BBC program called Icons: The Greatest Person of the 20thCentury. Tu Youyou, along with Albert Einstein, Marie Curie, and Alan Turing, were the four candidates in the scientist category. I was excited that Tu Youyou had been selected. I also realized that most Americans had never heard of her, even though Tu Youyou had saved millions of lives and had won the prestigious Nobel Prize. As a proud Chinese American, I had to share her remarkable journey.
Tell us about the research you did before writing this book?

There is very little material about Tu Youyou available in the US. Luckily, I can read Chinese and found a lot of Chinese books and material about Tu Youyou on the Chinese internet. During the process of researching the book, I was deeply touched by the personal sacrifices Tu Youyou had made for this project. She volunteered to be the first human tested with the extract of the sweet wormwood to prove it was safe before clinical trial. It was truly a selfless and brave deed. I wrote this incredible fact in my draft as I wanted to show how a courageous scientist she was. An editor suggested that talking about this personal medicine testing by Tu Youyou was not a good idea for young readers as it could be dangerous for them. So after doing research, it is crucial for a writer to choose just the right factual material to include in the manuscript.


Who is your favorite author?
Chris Van Allsburg is my favorite author and illustrator for his incredible children’s picture books. He is a master of plotting. His work is full of mystery and suspense. His illustrations are also so beautiful, detailed and original. I love all his books. Jumanji ; The Polar Express; The Mysteries of Harris Burdick; just to name a few.

For middle grade authors, my favorite is Lowry Lois. Her work is just phenomenal.

Giver is one of my favorite middle grade novels.

I grew up in the small town of Jilin, China during the Cultural Revolution. At that time, China was a cultural desert. There wasn't a single library in our town. All Western and Chinese traditional arts and literature were considered without virtue and were forbidden. We had no TV, only radio, and occasionally, Russian movies. We had eight national Beijing opera shows, but that was it. Chinese people read Mao's little red books at school and in their workplaces. Workers in the factories and farmers in the village would vote to decide who would go to college. Reading was my escape. I not only read Mao's book and text books, but every single book I could get my hands on. I was fascinated by the beauty and power of a good story and appreciated good writing. I was a good writer when I was little girl. Every so often, my writing assignments were read to my class. I dreamed of being a writer when I grew up.
Peek between the pages and the beautiful illustrations 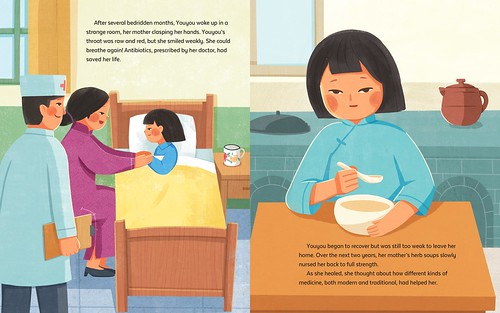 Tu Youyou was interested in science and medicine since she was a child. When malaria started infecting people all over the world in 1969, she went to work on finding a treatment. Trained as a medical researcher in college and healed by traditional medicine techniques when she was young, Tu Youyou experimented with natural Chinese remedies. The treatment she discovered, Artemisinin, saved millions of lives, earned her a Nobel Prize, and is still used all over the world today. 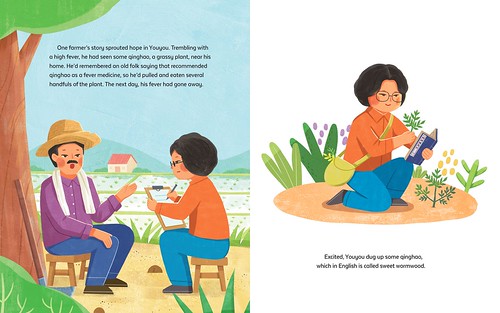 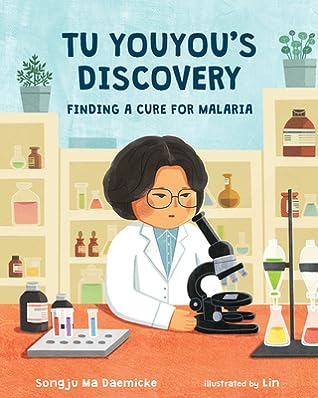 Tu Youyou's Discovery: Finding a Cure for Malaria
Author: Songju Ma Daemicke
Illustrator: Lin
Publisher : Albert Whitman &Co.
Targeted age(s) of reader: 4-8
A compelling introduction to a passionate and tenacious Chinese researcher – Kirkus Reviews
Blurb
Tu Youyou had been interested in science and medicine since she was a child, so when malaria started infecting people all over the world in 1969, she went to work on finding a treatment. Trained as a medical researcher in college and healed by traditional medicine techniques when she was young, Tu Youyou experimented with natural Chinese remedies. The treatment she discovered, Artemisinin, saved millions of lives, earned her a Novel Prize, and is still used all over the world today.
Read it today!
Amazon  |  Bookshop  |  Barnes & Noble  |  Goodreads 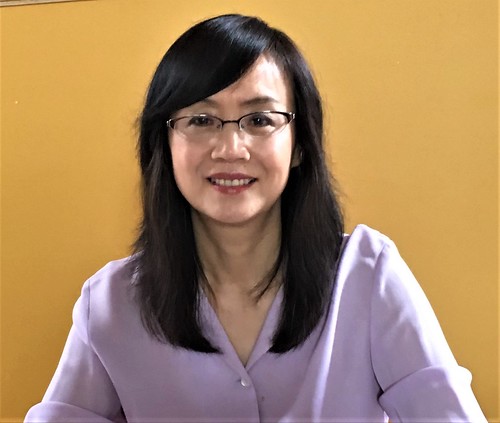 About the author:
Songju Ma Daemicke, a former software engineer with Motorola, grew up in China and is an award-winning children’s book author. Her picture book Cao Chong Weighs an Elephant was a Best STEM book, the Winner of 2018 CALA Best Juvenile Literature. When she’s not writing, she loves attending to her flowers and vegetables in her garden and shooting her next special photograph. Songju lives in the Chicago suburbs with her husband and their daughters. She invites you to visit her at www.songjumadaemicke.com

Email ThisBlogThis!Share to TwitterShare to FacebookShare to Pinterest
Labels: children's