Happy Book Birthday! The Devil Made Me Do It by Shawna Romkey

Congratulations to fellow Darkly Delicious YA member, Shawna Romkey on her release of The Devil Made Me Do It, book two in her Speak of the Devil series! Shawna is here with us today, plus I have an excerpt for you, but before we get to that, here's a little about the book... 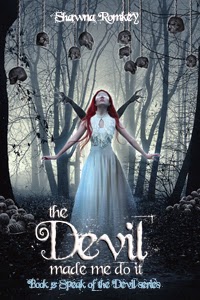 The Devil Made Me Do It, Book two: Speak of the Devil series

The demons strike back!

Lily is working with the angels to stifle the last of the demon outbreaks and to figure out how to stop the Silence of God, so life can get back to boring normality. But all hell breaks loose when she’s stolen from school and brought face to face with the devil himself. Lily has to find her way back home to Luc, crack the prophecy that breaks the curse silencing God, and figure out how she and Luc can ever really be together; but Lucifer has other plans for her that don’t include her ever getting out of Hell in tact.

Book One, Speak of the Devil,
is currently on sale for $2.99 for Kindle.

Cherie: Tell us about your novel, THE DEVIL MADE ME DO IT, in your own words.
Shawna: THE DEVIL MADE ME DO IT is Book two in the Speak of the Devil series. Speak of the Devil is the introductory book where we discover the characters, the world and the situation. In TDMMDI we are left in that world, and taken even farther when the main character Lily discovers a prophecy about the Silence of God and is taken to Hell.  It’s darker than the first book and is the transition between the origin book and the resolution book, which will be the third one in the series.  It’s The Empire Strikes Back of the trilogy, hence my tag line: The demons strike back!

Cherie: Where did you get the idea for your novel?
Shawna: Three of my friends died in a car crash when I was in high school. The first book in the series starts with a similar event. It’s something that happened nearly thirty years ago but still touches me, so I wanted to write about it to get it out but also have it make some sense. With real life, it’s hard to work through those things, but the paranormal allows me to give it meaning and purpose.

Cherie: It’s nice to have writing as an outlet. What was your most difficult chapter to write?
Shawna: My first chapters always suck, and the first chapters are the important ones. So usually I write them, the trudge along and finish the rest. The story matures and grows and twists from where it was at the beginning, so I can then go back and do a complete first chapter rewrite. That happened with both of these books. In the first book it originally started with Lily getting a phone call hearing about her friends dying in an accident. That was too passive. After I finished the book, I went back to chapter one and put Lily in the accident with her friends, and that, as Frost would say, made all the difference. It made for a much more immediate beginning, added action and gave a reason for how she got her abilities.

Cherie: Oh! I like that you put her in the car. That is more immediate. What are you working on now?
Shawna: I’m currently working on a new potential series called 13 Moons. The first book is called CROW MOON, which is a YA/NA paranormal about a mixed race character who, after losing her father, finds herself trying to unravel the secrets of her estranged mother’s family. I’m about a third of the way through this and plan on self-publishing it by the end of the year. The blurb looks something like this at this point:
After Leni loses her father, she’s sent to live with her eccentric aunt out in the country. She wants to go to college and do what her father has always wanted her to, but the mysteries of her estranged mother’s family lead her to start unraveling the secrets long ago lost and hidden away. Will she be able to find out who she really is while living up to her father’s last wishes, or will the powers of the Crow Moon claim her for itself?

Cherie: Sounds interesting. J Now that we know about your book and you as a writer, I have some fun questions for you. Try to answer in five words or less:

Secret crush? (It can be anyone real or fictional.)
Dean Winchester

Do you believe in love at first sight?
Most definitely!

Have you ever experienced that head-over-heels, tingly, have-to-get-to-know-someone feeling yourself?
Repeatedly.

Who are you drawn to the good guy or the bad guy?
Bad boys, bad boys… what ya gonna do?

What’s the first thing you notice about a guy?
sense of humor

If you had all the money and time in the world, where would your dream vacation be?
Greek islands.

Are you a morning person or an evening person?
Ha, evening, definitely

Favorite movie or television show?
Lord of the Rings and Game of Thrones. Love American Horror Story and just getting into Penny Dreadful and really digging it too.

Guilty pleasures that get you through the writing/revising process?
Pictures of cool people and places on Pinterest. Sitting alone in my room with my lap top, still in bed with my dogs lying beside me. Chocolate. Wine. Modern alternative rock.

Who is your mentor?
My RWA chapter members. They are amazingly talented and prolific. They educate and inspire me regularly.

What book are you the most excited to read?
The next in the Song of Ice and Fire series by George RR Martin

Are there any types of books you don’t read?
I have to have supernatural elements.

Thanks, Shawna, for being with us today!

Why me? I asked this question a lot, when I died, when I lived, when I’d lost my friends, when I’d hooked up with angels, when I was chased by demons, so it seemed trivial to ask it now, but why me? Why couldn’t I have a regular non-angel boyfriend to make out with and not worry about ruining, well, everything for everybody everywhere?
Snap out of it, Lily, I told myself. You have an amazing ability and super-hot— too hot— angel boyfriend, a blessed life that someone upstairs seems to think is valuable and worthy of protection. Quit feeling sorry for yourself and girl up.
“Right, girl up. I can do this,” I said aloud. My body was under control finally and I felt like I could go back to class as long as we got a new scene to work on. But I’d hurt Luc. I had to talk to him. I had to fix it and make it right. He was suffering with this as much as I was and probably more so since he had to have that pious-angel behavior and all.
I stood to go, pushing the vanity chair back as I did so.
“Lily!” someone whispered. “What?” I turned to see if Cassie was there. “Lily, look!” It was difficult to tell if it was a male or female voice since it was a whisper.
The voice was coming from behind me. I looked back around – that’s when I saw the surface of the mirror tremble, as though it were liquid. It rippled from the center. “Lilith!” The whisper came from the mirror.
Too late I remembered something Luc and Belle had said about mirrors. The surface splashed out toward me, and though I reflexively turned away and pulled back, the watery mirror grabbed me with its newly formed reflective arms and pulled me inside. 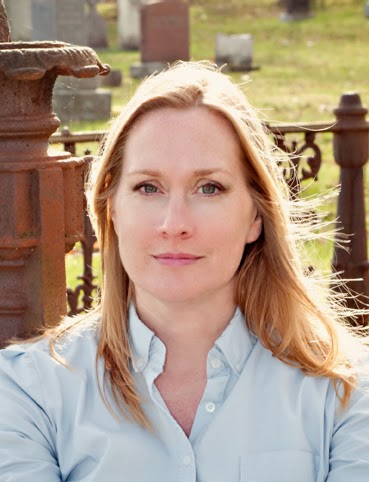 Shawna Romkey, teacher by day, writer by night (or day or whenever anyone leaves her alone long enough to get some work done). Bestselling YA / NA paranormal author of Speak of the Devil. The second in the series, The Devil Made Me Do It, will release July 1.

Shawna is from Kansas City, Missouri, but resides in Nova Scotia in a house by the sea with her husband, two sons, and currently two dogs but that’s subject to change depending on the local homeless dog population.

For more info, check out her website at www.shawnaromkey.com.