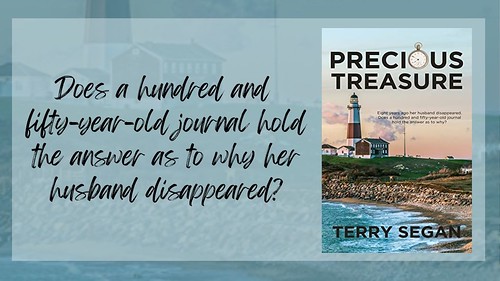 I'm delighted to welcome Terry Segan, author of Precious Treasure, a paranormal mystery, to my blog. She answered a few questions and shared an excerpt. So without further ado, let's meet Terry.

I’ve always been intrigued with dual timeline books, which helped inspire Precious Treasure. While most of the story takes place in the present, the reader gets a glimpse into the life of a young, Confederate soldier through the journal entries woven into the chapters. I grew up on Long Island and found it to be the perfect setting for Janie, the main character. The majority of my research went into discovering details depicting the life of the soldier, William. I needed information about uniforms, battle locations and even food rations allocated during the Civil War. To get a flavor of how he would have spoken, I read samples of actual letters written by men during that time period.

My favorite genre to read is paranormal mysteries, followed second by thrillers. That’s probably why I’m drawn to craft stories in the same categories. When I say ‘paranormal,’ the term doesn’t only include vampires or werewolves. For me, I refer to ghosts, time travel, mysterious or unexplained objects and mystical places as well. A favorite book I’ve read several times is The Eight by Katherine Neville. It involves a dual timeline, a tenacious heroine, and a mystical chess set. Reading a book in which I can’t guess what’s coming next always lures me in.

When I’m not writing, my favorite thing to do is travel. My last name in Russian means gypsy, so there might be something ingrained in my soul which drives me to wander. I can’t say I completely remove myself from writing during these times, as many of my settings or story ideas come from trips taken. In the last six months, I’ve been lucky enough to visit San Diego, Lake Havasu City (where the original London Bridge resides), Salt Lake City, the Oregon coast, and the Caribbean. My favorite mode of transportation is the back seat of my husband’s motorcycle. We can travel for hours without speaking a word to each other, as my mind is busy composing plots and working out scenes while enjoying the scenery as it slips past. Who knows where my next story may take the reader? 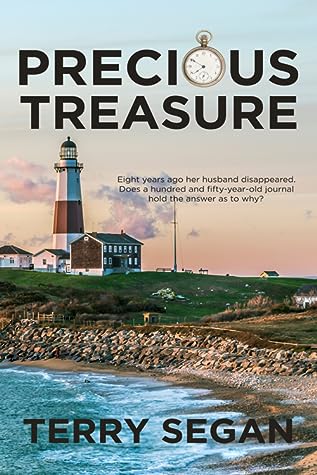 PRECIOUS TREASURE
Author: Terry Segan
Genre: Paranormal Mystery
Blurb
Janie Holcomb prays for closure once the courts declare her missing husband dead. Instead, she's sent spiraling down a dangerous path.
When her lawyer delivers a package held in trust, she finds a cryptic warning along with a Civil War journal promising buried treasure. While seeking a connection between her spouse and the decades-old diary, Janie attracts the spirit of a Confederate soldier pleading for help.
Enlisting her brother's assistance to chase down clues, they discover that not everyone they know should be trusted. Janie overlooks potential threats when the promise of new love stirs her emotions. Will her digging uncover the answers she craves or doom her to a similar fate?
Grab your copy
Amazon | Barnes & Noble | Goodreads
Peek between the pages

Janie dragged herself out of bed and into the bathroom. Turning on the tap to fill the sink, she bent over and splashed cold water on her face. The refreshing drops rolled down her forehead, cheeks and chin, pulling her out of her funk. Sightless, Janie reached for the hand towel hanging nearby and dried her face as she stood upright. Opening her eyes, she leaned in to examine the damage of the late night on her complexion. Her reflection looked back, as well as that of a young man standing behind her. Janie’s heart leapt to her throat as she whipped around and found no one there. Looking back in the mirror, she saw only herself.

This is too much, she thought. First nightmares and now hallucinations. Janie shook her head. With the assault of information thrown at her in the last twenty-four hours, her imagination cartwheeled out of control.

Knowing the visions were a result of the wine, newspaper articles and journal, didn’t calm the raised hackles on the back of her neck. The foreboding in Brian’s letter snaked its way up her spine threatening to encircle her throat and squeeze tight. His writing had a tone of uncertainty and fear—uncharacteristic of the man she had married. 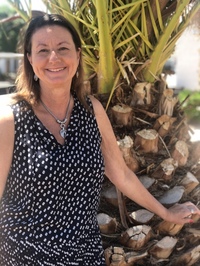 About the author:
Terry Segan resides in Nevada. The beach is her happy place, but any opportunity to travel soothes her gypsy soul. The stories conjured by her imagination while riding backseat on her husband’s motorcycle can be found throughout the pages of her paranormal mysteries.