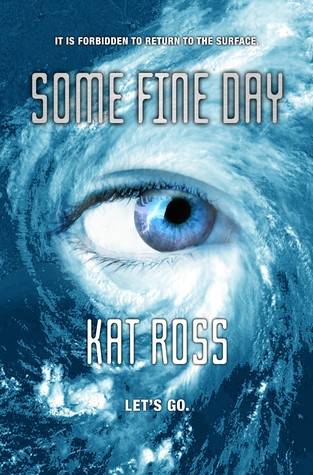 SOME FINE DAY
by Kat Ross

Synopsis: A generation ago, continent-sized storms called hypercanes caused the Earth to flood. The survivors were forced to retreat deep underground and build a new society.

This is the story that sixteen-year-old Jansin Nordqvist has heard all of her life.

Jansin grew up in a civilization far below the Earth’s surface. She’s spent the last eight years in military intelligence training. So when her parents surprise her with a coveted yet treacherous trip above ground, she’s prepared for anything. She’s especially thrilled to feel the fresh air, see the sun, and view the wide-open skies and the ocean for herself.

But when raiders attack Jansin’s camp and take her prisoner, she is forced to question everything she’s been taught. What do her captors want? How will she get back underground? And if she ever does, will she want to stay after learning the truth?

Cherie: Tell us about your novel, Some Fine Day, in your own words.

Kat:  Hey Cherie! Let me first say thanks for having me on your blog, I’m a big fan of your books. As to mine…well, it’s set towards the end of the century, at a time when runaway climate change has left the surface of the planet largely uninhabitable. The problem isn’t only extinction of species and major sea level rise, but permanent superstorms (think Hurricane Sandy times a hundred). They’re such an integral part of the story and the psychology of the characters, I sort of imagine them as characters too, really scary ones. Anyway, the narrator and hero of the tale is a 16-year-old girl who’s grown up underground. When she does finally go above, she’s in for a lot of surprises.

Cherie: I'm so glad you enjoyed my books. =) And I can't wait to read yours! Those are some scary storms! Can you tell us about your writing process?

Kat: I wrote Some Fine Day entirely during stolen moments: train rides, waiting rooms, a few hours late at night when my daughter was sleeping. It went in fits and starts, like most books do, but I finished a draft in about a year. Now I’m more ruthless about making the rest of my life fit my writing schedule, so I set aside time first thing every day to write before the world comes crashing in. I feel less guilty that way!

Oh, and I’m a total plotter. I really need to know what is going to happen and how it ends, although of course spontaneity happily creeps in along the way.

Cherie: Funny how us writers have to steal time to write. Where did you get the idea for Some Fine Day?

Kat: Believe it not from The Onion!  December 2008. Hurriphoonado Cuts Swath Of Destruction Across Eastern, Western Hemispheres.

It was funnier seven years ago, granted, but at the time I thought it was brilliant. I didn't start writing Some Fine Day just then, but that article always stuck with me. It became one of those "what if" moments.

As in, what if something like that actually happened? And what if it didn't go away?

When I knew I wanted to write a story about that (the folder with all my booky wook stuff is still called hurriphoonado), I did throw myself into research (Google), and discovered that in fact, there is something called a hypercane. Theoretical, yes, but so is fiction. I emailed the very smart man at MIT who ran the computer models and he patiently explained to me how they form and other cool tidbits.

Yeah, the book pretty much wrote itself after that.

Anyway, if you're intrigued by hypercanes, I have a little page devoted to them, in all their glory, on my website.

Cherie: Hurriphoonado is just fun to say! What was your favorite (or most difficult) chapter to write?

Kat: I struggled with the end, and the love scenes. Those are hard! The line between romantic longing and cheesiness is so razor thin. I asked Mama Google for advice and found some great tips from writers that steered me in the right direction.

Cherie: Thanks for the link. Can you share with us something about Jansin that we don’t learn about them from reading the book?

Kat:  She’s actually very playful with a mischievous sense of humor. During the editing process, I had to lose one of my all-time favorite scenes in the book which really showed that side of her because it wasn’t working with the pacing very well, but if I do finish the sequel, I hope that aspect of Jansin’s personality comes across. With all the insane things that happen to her in the first book, she can be very serious!

Cherie: Good to know there is a very good chance there will be a sequel. What are you working on now?

Kat: Oooh, I’m almost done with the first draft of a new manuscript but I haven’t told anyone the plot yet, not my husband, agent or editor. I will say it’s set in Maine, Budapest and Siberia and is a twist on the usual paranormal romance. It also has rare book collecting, Zoroastrianism, and a truly horrifying villain.

Cherie: I'll just have to stalk you on social media to find out more (when you announce it, of course). Now that we know about your book and you as a writer, I have some fun questions for you. Try to answer in five words or less:

Secret crush? (It can be anyone real or fictional.) Sherlock Holmes, as played by Benedict Cumberbatch.

Do you believe in love at first sight? Yep. I’m living proof.

Have you ever experienced that head-over-heels, tingly, have-to-get-to-know-someone feeling yourself? My husband. (see above)

Who are you drawn to the good guy or the bad guy? Damn. Bad guy.

What’s the first thing you notice about a guy? If they make me laugh.

If you had all the money and time in the world, where would your dream vacation be? New Zealand.

Are you a morning person or an evening person? Morning!

Favorite movie or television show? Anything with zombies.

Guilty pleasures that get you through the writing/revising process? Gum & chocolate.

Who is your mentor (or hero)? My dad.

What book are you the most excited to read? The Wicked Will Rise.

Are there any types of books you don’t read? Very few; contemporary fiction only if it’s super, John Green-ish good.


I'm drawn to the bad guys too.

Thanks you so much, Kat, for taking the time to be with us today! Best wishes for a great launch!

READ SOME FINE DAY TODAY:
Some Fine Day is available for purchase on Amazon and Barnes & Noble.
You can find more reader reviews on Goodreads.

You can check out the trailer here.

ENTER TO WIN
a Rafflecopter giveaway

About the author:
Kat Ross was born and raised in New York City and worked several jobs before turning to journalism and creative writing. An avid traveler and adventurer, she now lives with her family—along with a beagle, a ginger cat, and six fish—far enough outside the city that skunks and deer wander through her backyard.
You can find Kat on Twitter and her website.
Posted by Cherie Colyer at 6:00 AM