I’m pleased to have C.J. Burright with me today. Her novel, Wonderfully Wicked, released on May 13th and while I haven’t read it, yet, I’m looking forward to curling up with this one. 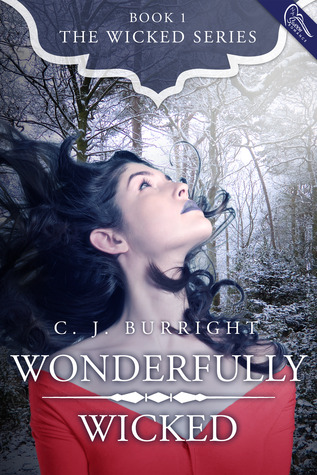 Synopsis:
He haunts her dreams and embodies her nightmares…

A dreamcaster with the ability to channel creatures from her nightmares, headstrong and cynical Kalila Montgomery longs for a peaceful, picket-fence life…until the man literally of her dreams kidnaps her. Survival quickly becomes her number one goal, yet a growing attraction to the man in her nightmares is impossible to ignore. While she fears he will kill her, other, more terrifying enemies surround her, and Kalila succumbs to his scheme to escape.

She may be his one hope for freedom…

A deadly combination of power, cunning, and cold-hearted charm, Lydon v'al Endrian fears nothing. Feels nothing. Chained to a brotherhood of men with the supernatural ability to invade dreams, he hunts dreamcasters to be harvested for their dreams and killed. His target: Kalila Montgomery. But Kalila awakens an undeniable dark desire and a longing for a freedom long-lost. To gain everything he craves, Lydon must seduce Kalila before his plot is discovered…a hopeless challenge which, if failed, will earn him a death-sentence.

Caught up in a dangerous world of secrets and obsession, doubt and betrayal, Kalila and Lydon face the nightmare of their lives, where love will either deliver them—or destroy them both.

Cherie: Tell us about your novel, Wonderfully Wicked, in your own words.

C.J.:  Kalila Montgomery is a dreamcaster - her dreams consist of nightmares, and the creatures from those nightmares leak, which sucks big time. She wants nothing more than to be normal, but life gets weirder when the guy from her nightmare shows up at her favorite coffee shop. Which wouldn’t be a big deal, except he’d killed her in the nightmare. And loved her in another. She’s really not sure which is worse.

Lydon v’al Endrian (said nightmare guy) has been sent on a mission: to capture Kalila and return her to his master. He’s a V’alkara - a man who invades dreams and hunts dreamcasters to harvest their nightmares. His motives are nothing but deadly…until he meets Kalila. He senses she is the key to freedom from his master, but he has some serious scheming to do if he wants to escape his master, save Kalila (not to mention himself), and convince a skeptical Kalila to trust him. What could possibly go wrong? *author’s villainous laughter here*

Cherie: Wonderfully Wicked sounds like the type of book I'll enjoy. Can you tell us what your writing process like?

C.J.:   Brain-flash, rush to computer, and fingers fly before I forget anything. Then, the snail-slow procedure of smoothing out said idea into something readable for other people. I need some sort of techie invention to capture the movies in my head and write them out on paper exactly as I see them. It would save so much time!

Cherie: What was your favorite chapter to write?

C.J.:  One of the most fun chapters included a dreamscape. With lots of spiders. I hate spiders. Why did I write about spiders? Gah. Kalila is tethered to her bed by spider webs, and luckily doesn’t mind the creepy-crawlies like I do. She soon faces an even worse nightmare:  Lydon. Charming her socks off.  Scary.

Cherie: I'm not a fan of those creepy crawlers either. Can you share with us something about Lydon that we don’t learn about them from reading the book?

C.J.:  He’s a diehard Imagine Dragons fan. Don’t know where he got that from … oh, wait. That would be me.

Cherie: What are you working on now?

C.J.:  The sequel to Wonderfully Wicked - Beautifully Burned, which tells the story of Daxen, a secondary character in WW. Yeah, he has about as much trouble with his dreamcaster as Lydon has with Kalila. J

Cherie:  Now that we know about your book and you as a writer, I have some fun questions for you. Try to answer in five words or less:

Secret crush? (It can be anyone real or fictional.) Alex Skarsgard. Love him.

Do you believe in love at first sight? Intrigue, yeah. Insta-love? No.

Who are you drawn to the good guy or the bad guy? Bad guy who’s secretly good.

If you had all the money and time in the world, where would your dream vacation be? All of Europe.

Are you a morning person or an evening person? Night all the way.

Guilty pleasures that get you through the writing/revising process?  Cheez-Its.

Are there any types of books you don’t read? Mysteries - no detective genes here!

Thanks for having me on your blog, Cherie!

Thanks C.J. for being here!

About the author:
C. J. Burright was born and raised in Oregon and loved it so much she never left. While she has worked for years in a law office, she chooses to avoid writing legal thrillers and instead leans toward urban fantasy, paranormal romance, or—since all things medieval and magic fascinate her—fantasy romance. A member of Romance Writers of America and Secretary for the Fantasy, Futuristic & Paranormal special interest chapter, C. J. also has her 4th Dan Black Belt in Tae Kwon Do and believes stories should always include a gratuitous fight scene. In what spare time she has, she enjoys working out, reading, gardening, and rooting on the Seattle Mariners with a nice glass of wine. She shares a house with her husband, daughter, and a devoted herd of cats.