Image from https://www.marycunninghambooks.com/
I'm delighted to welcome Mary Cunningham to my blog. This is such a fun interview, and her new book, Margaritas, Mayhem & Murder sounds like the perfect cozy mystery to curl up with this summer. Let's meet Mary, and be sure to stick around to learn more about the book!
Mary, welcome to my blog. Can you tell us how you came up with the concept and characters for Margaritas, Mayhem & Murder?
Keeping with some excellent advice I got years ago, to “write what you know’, Andi Anna Jones’ character and job are loosely based on a horrifying stint I had in North Miami Beach as a travel agent. I was truly awful and would duck down behind my computer whenever a customer came in the door.

Fortunately, I worked with a fabulous agent named Ellen who recognized my fear and would usually jump in to help when I got stuck. In honor of Ellen, Andi’s sidekick and true manager of Graves Travel Agency is Ellie. She saves Andi’s backside in the same way Ellen saved mine. The only thing Andi finds irritating about her assistant is that she always calls her, Jonesy.

Writing the book will helped exorcise the experience from my memory by giving Andi a positive outlet for her curiosity and love of a good mystery.

I’m sort of a fantasy buff. The Lord of the Rings Trilogy, along with The Hobbit, stayed with me for decades. In fact, I still enjoy rereading the books.


Tell us something unique/quirky about yourself.

I could fill up the whole page with this, but I’ll give just one. I was a Bee Gees groupie in my early 30’s! Yes, you read that right. My best friend and I went to four concerts in 1979, met their dad, tour manager, and head of security. Oh, and we met, and were kissed by, Barry Gibb!

Now you know how easy it is for me to include quirky characters in my books! 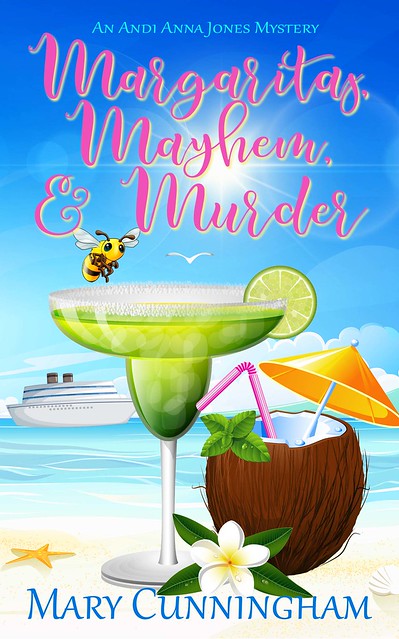 Margaritas, Mayhem & Murder
Author: Mary Cunningham
Genre: Cozy Mystery/Amateur Sleuth
Blurb
Andi’s stepmom, Ruby, is a piece of work, but is she a murderer?
Andi Anna Jones, so-so travel agent/amateur sleuth, puts aside her resentment of her father’s widow and books a 60th birthday cruise to Cancun for Ruby and three friends. Never does Andi imagine the cruise will include the murder of a has-been lounge singer—or that Ruby might be the main suspect.
Flirting with more than danger after arriving in Mexico, Andi connects with charming local sheriff, Manual Gonzales. An embarrassing night involving the sheriff, too many margaritas, and a Mariachi band, can’t quell her determination to clear the name of her ex-stepmother.
While gathering clues and interviewing witnesses, however, she suspects dear old step-mom isn’t the only one in jeopardy.
Grab your copy
Amazon  |  Barnes & Noble 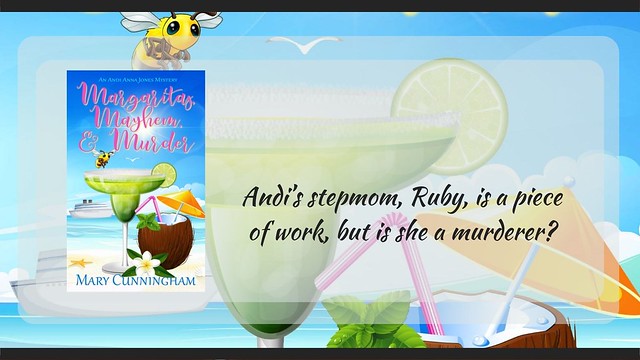 Peek between the pages...

I jumped when the phone rang in the middle of grinding espresso beans. I weighed the options. Much-needed caffeine or my sense of duty? Duty won.

Well, this sure isn’t Ruby. Nice baritone. “I’m here, but you’re cutting out. Who’s this?”

“Jones. But then I imagine you already know since you called me.” Was this the “high-fallutin’” sheriff who arrested Ruby?

“Miss Jones, I apologize for the early morning call, but you were given as the main contact by one of our prisoners. I’d like to ask a few questions if I may.”

“I assume you’re calling about Ruby Jones.” Ground coffee beans beckoned. A half cup of scalded frothy milk waited to join fresh-brewed espresso. Darn. Why didn’t his call come in after I made coffee? I walked from the kitchen, blaming the man on the other end of the phone for my caffeine deprivation. “Ask away, Sheriff Gonzales.”

“First, allow me to get you up to speed regarding last night’s—uh—apparent homicide. I personally inspected the scene and made the arrest. Regarding the suspect, she is currently being—”

“Wait.” I cut him off, mid-sentence. A high-pitched commotion in the background sounded all too familiar. “Is that Ruby?”

“You can’t do this to me! I have rights as an American citizen! Remember the Al-a-moooo!”

I smiled for the first time since the nightmare began. Good luck shutting Ruby up. 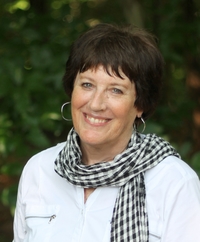 About the author:
Author, Mary Cunningham, grew up on the northern side of the Ohio River in Corydon, Indiana. Her first memories are of her dad's original bedtime stories that no doubt inspired her imagination and love of a well-spun "yarn."

Through the author's horrifying stint as a travel agent, Andi Anna Jones sprang to life. The adult/mystery series gives extra meaning to the phrase, "Write what you know." Cunningham has several books published, including Cynthia's Attic series, a five-book middle-grade fantasy, and women’s lifestyle/humor book, WOOF: Women Only Over Fifty.

When she gives her fingers a break from the keyboard, she enjoys golf, swimming, and exploring the mountains of West Georgia where she makes her home with her husband.

Email ThisBlogThis!Share to TwitterShare to FacebookShare to Pinterest
Labels: mystery