The unexpected start to the Embrace Series 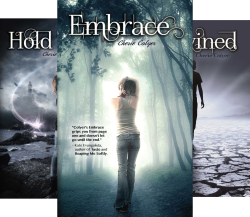 A reader recently asked me if  I planned for Embrace to be a series. I didn't. Embrace, the first novel in my young adult paranormal romance/thriller series, was written to be a standalone novel. That’s not to say I didn’t know what awaited my determined, incredibly loyal protagonist, Madison Riley, in her future. I’ve yet to write a book where I haven’t had glimpses of what will happen to my characters after the last word of the novel is written. Let’s face it; life doesn’t stop when a person overcomes one obstacle. We learn from the experience, grow, and often find a new challenge to conquer. The same is true with well-rounded characters. As I wrote Embrace I not only knew what brought Madison to the point in her life where the book started, I knew where her choices would lead her. This made it easy for me to weave in tiny details she’d need to help her and her friends in the future.

After Embrace released, the most wonderful thing happened: readers wanted more of my witchy friends. Returning to Embrace was like visiting close friends. I already had intimate knowledge of my characters, their likes and dislikes, and their strengths and weaknesses. That made it easy for me to dive right into a new story.

In book two, Madison not only finds herself trying to hold on to her new boyfriends, but she’s also trying to hold on to the people she loves and her humanity. The plot for Hold Tight came together quickly and small details from Embrace, like Madison and Josh's trip to a crossroad, the iron fixtures in Isaac’s room, and the various protection wards he cast, became important to Madison's survival.

One of the nice things about turning Embrace into a series was that I got to dive even deeper into the world I created. In Hold Tight, I added more romance, increased the danger, and raised the stakes. When Madison cast a spell that unknowingly invited two dangerous yet enticing creatures into her life, she quickly discovered just how dangerous it can be to possess magical powers, and she learned there are things her magic can’t undo.

In book three, Madison is tested in new ways and she faces even tougher decisions. Her good friends, Kaylee and Josh, are back as is her sexy, intriguing, and powerful boyfriend, Isaac Addington, along with one confident, darkly appealing crossroad demon. Be sure to check them out!