I met Angela Brown during a Platform Builders Campaign hosted by Rachel Harrie back in 2011. I've enjoyed following Angela's blog and was so excited when I saw that her novel Neverlove was being published. Today, I have the pleasure of having Angels here with me.

First, I want to share the beautiful cover and a little about the book with you.

Synopsis:
Neverlove - For Abigail and Basil, there is a choice they both fear making.  Duty or love?  There can be only one.


Longer description:
For seventeen-year-old Abigail, one rash decision leads to an unexpected chance for redemption. At V'Salicus Academy, a unique institute where she trains to become an agent of heaven, she struggles with the pain of her past, the changes of the present and accepts a loveless future until her path – and heart – crosses with Basil’s.

Basil's off-chance slip of the tongue binds him to a life of servitude to the Devourer, the master of hell. His existence has no upside until a chance meeting with Abigail brings new perspective.

Keeping the truth of their present lives from each other brings disaster when secrets are brought to light and the life of Abigail’s mentor is put on the line.

Can Abigail and Basil save her mentor and salvage their love amid the chaos? Or will they lose it all, destined forever to NEVERLOVE?

Now, I hope you'll help me welcome Angela to my blog.

Cherie: Tell us about your novel, Neverlove, in your own words.
Angela: Neverlove is a dark upper YA, a story of second chances, forbidden love and hope in the least expected places. With paranormal, action and romance infused throughout, Neverlove makes for a great late night read.

Cherie: Where did you get the idea for your novel?
Angela: Neverlove is actually a novel written in response to reader interest in my Abby and Basil blog opera during the 2012 A to Z blogging challenge. The original idea for Abby and Basil was inspired by my obsession – erm – love of Adele’s song “Set Fire to the Rain.”

Cherie: What was your favorite (or most difficult) chapter to write?
Angela: Honestly, the very first chapter was both my favorite and most difficult chapter. It’s a confronting sequence dealing with very sensitive and dark content that includes a suicide attempt. To try and write about such things half-heartedly would be an insult to those who’ve dealt with these issues in their lives. So I tried my best to write things out understanding people deal with these issues in real life and respond in different ways as well.

Cherie: What are you working on now?
Angela: I have a few projects in the work, one being RIPPED TIES, a YA urban fantasy/dystopian. It’s a story of one girl’s discovery of her true heritage and her ability to destroy the world if her powers ever fell into the wrong hands.

Secret crush? I LOVE Johnny Depp. If I were to meet him in person, I’d probably melt into a puddle of driveling idiocy, a seriously stammering fangirl or faint flat out lol!!

Are you a morning person or an evening person? An evening person. I’ve been working on having a more #bepositive attitude in the mornings, but I’m a work-in-progress lol!

Favorite movie? LOTR trilogy, Crouching Tiger, Hidden Dragon and Matrix would have to battle out for this title

Guilty pleasures that get you through the writing/revising process? Wild Cherry Pepsi and chocolate J

Thanks, Angela, for being here today! 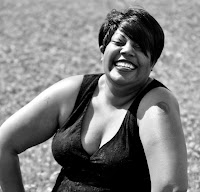 Reading and writing have been lifelong passions. It was around the time she gave birth to her forever-love, nicknamed Chipmunk, that she really took writing seriously. After all, how could she teach her child to follow her dreams if she hadn't tried herself?

As a YA fantasy/sci-fi reader and author, she favors the magical, mysterious, the darker side of life...even harbors a secret fright for things that go bump in the night.

NEVERLOVE is a special project spawned from a blog-challenge-turned-blog-opera, the Abby and Basil affair. It is the first in the Shadow Jumpers series.