With me today is Kimberly Baer. She's chatting about writing, reading, and life. Plus, she shared the trailer and an excerpt to her spunky middle-grade novel, Mall Girl Meets the Shadow Vandal. This is a fun read with characters kids will relate to and a spooky mystery that needs solving. Perfect for kids who love unraveling a great mystery.
Let's get right into the interview...

Welcome, Kimberly!
What are three things we’d find if we looked under your heroine’s bed?
(1) A banana, because Chloe’s mom heard that bananas last longer if you separate them. You’ll find bananas in all sorts of strange places in the Lamonts’ house: on the fireplace mantel, in Chloe’s sock drawer—and probably under her bed, too.
(2) A mystery book, because that’s what Chloe likes to read. Of course, she’s not so crazy about the mystery she’s living. Being a twelve-year-old crime suspect can really get a girl down.
(3) Sticky notes covered in T-shirt sayings. Chloe has been jotting down the messages she sees on people’s T-shirts. Why? So she can turn them into a poem and enter it in the Creative Endeavors contest at school. But can she beat that snooty Ashley Elizabeth, who considers herself the class writer?

What book stayed with you long after you finished reading it.
Ida B, by Katherine Hannigan. This is a middle-grade novel about an irrepressible fourth-grader whose family must deal with difficult circumstances. I read the book more than a decade ago (as an adult, not a kid), but I still remember how that little girl leapt off the pages and entered my life. She became as real to me as the flesh-and-blood kids I knew. Kudos to Ms. Hannigan for creating such a memorable character—and a sweet, funny, uplifting story.

My followers love to learn a little about the author. Can you tell us what you do when you’re not writing?
I like to go power-walking. It’s great exercise—but that’s not the only reason I do it. When I slip on my sneakers and head outside, I’m actually continuing to write. My route is pretty rigorous because it includes lots of hills, and the increased circulation to my brain does wonders for my creative thinking ability. If I’m having trouble with a scene, I think about ways to resolve it. If a sentence doesn’t sound quite right, I try out alternate phrasing. I’m continually amazed by how many new ideas I get and how many problems I solve while exercising.


Thank you, Kimberly!
Now, let's check out her newest book! 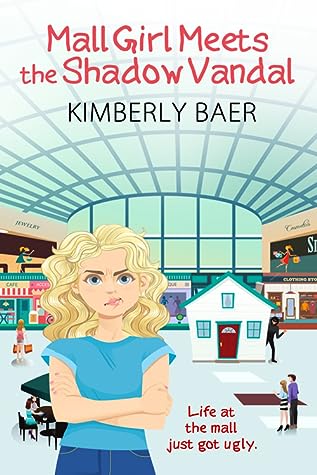 “A lively, jaunty mystery with a terrific cast of characters.” – Kirkus Reviews

Chloe Lamont doesn't live in a neighborhood, like most kids. Her house is in the middle of the mall. And now someone is stealing items from her house and using them to vandalize stores. Who is trying to frame her? And how are they getting into the house?

Desperate to catch the real vandal and clear her name, Chloe seeks help from the kids in her Mystery Reading Group at school. While searching for clues, the Mystery Groupers make an astounding discovery. And then things get really crazy…

The next morning, Mom and I find out there’s been another incident. And by morning, I mean two-fifteen a.m.

The pounding on the front door wakes us both. We stagger to the living room in our pajamas and bathrobes, exchanging looks of dread. We know even before Mom unbolts the door what this is about.

Hal is standing on our porch, huffing and puffing like maybe he had to up his usual walking pace from leisurely saunter to moderate stroll.

“It’s happened again,” he says, panting. “Another attack. I was down by the doughnut shop when Tom, the other guard, calls down to me from the upper level. ‘Intruder!’ he says. Hoo, let me catch my breath.”

He clutches his heaving chest for a minute and then continues. “Anyway, I saw the guy maybe fifty feet away. I yelled for him to stop, but he took off. Turned down the Farringer’s wing. When I got down here—nothing. Not a soul in sight.”

Hal stares at us meaningfully.

“Well, where do you think he went, Hal?” my mother asks in her scratchy pre-breakfast voice.

“He couldn’ta gone nowhere, Ursula. That’s the thing. All the stores got their gates in place. There aren’t any exits in this wing. The only place he coulda gone is right here. Into your house.”

I gasp and step closer to my mother, glancing around the living room, then toward the kitchen. An intruder in our house? It’s a notion out of a thriller movie.

My mother is shaking her head. “There’s no way he could have gotten into our house. The door was bolted just now when I came into the living room.”

“What about the back door?” I say.

My mother whirls around and marches toward the rear of the house. I’m right on her heels. Hal, not bothering to wait for an invitation, enters the house and follows us.

The back door is bolted, too.

We check the windows. All are locked. Hal keeps barking importantly into his walkie-talkie, communicating with Tom. He says things like “roger that” and “perpetrator” and “oh-two-hundred hours,” trying to sound like actual law enforcement and not just a night guard in a shopping mall. He tells us the police are on their way.

“What kind of attack?” my mother finally asks.

“He used spray paint this time. Vandalized about five stores between Deluca’s and the Farringer’s wing.”

Spray paint! I’m on the verge of swooning. I almost ask if the spray paint was hot pink but stop myself in time.

“I don’t know if it was a man. Gotta call him something. Ain’t about to keep saying ‘he or she.’ The person wasn’t very big—I can tell you that.” His eyes drift to me.

We pace around the tiny living room as we wait for the police. Finally there’s a rap on the door. Two police officers are standing there—Officer Sanford, the burly, shrewd-eyed cop who interrogated us after the knife attack, and Officer Pritts, the sandy-haired younger cop who looks like a veterinarian. Officer Pritts smiles at me. Officer Sanford does not. Good cop, bad cop, I think.

Officer Sanford tells Hal he’s wanted at the scene of the crime, where several other police officers are gathering evidence. Hal gives my mother and me an uncomfortable nod and ambles away.

Officer Sanford asks the usual questions. Where were we tonight, did we see or hear anything unusual, did we leave our house at any time after mall hours, did we give anybody a key.

Then he says, “We need to take a look around. You can let us do that now, or we can get a search warrant.”

Search warrant! That’s what the cops on crime shows get when they think they’ve found the guilty party and want to search his house.

“By all means, look around,” Mom says. “We have nothing to—hide.”

She falters on that last word, like maybe she just remembered the spray paint can. She knows I left it on the top cellar step. The can isn’t noticeable when you go down the stairs because it’s nestled in the corner of the step. But every time she comes up from the cellar, she spots it and says, “Chloe, the next time you go to the cellar, please take that can of spray paint down.”

Since I never go to the cellar, the can hasn’t made it back to the laundry room. It’s possible the Shadow Vandal took the can with him when he was done vandalizing those stores. But if he put it back on the cellar step, the officers are going to find it.

Kimberly Baer wrote her first story at age six. It was about a baby chick that hatched out of a little girl's Easter egg after somehow surviving the hard-boiling process. Nowadays she enjoys writing middle-grade and young adult fiction. She lives in Virginia, where she likes to go power-walking on days when it's not too hot, too cold, too rainy, too snowy, or too windy. On indoor days, you might find her binge-watching one of her favorite TV shows: Gilmore Girls, Friends, or The Office.

You can call her "Kim." All her friends do.